Can this be the worst Succubus costume ever?

I have called a lot of costumes that I have found really bad, awful, the worst, and one or two of them have managed to be called the worst ever.

I have another candidate for the the worst ever and it might, just might, really be the one that claims the record… 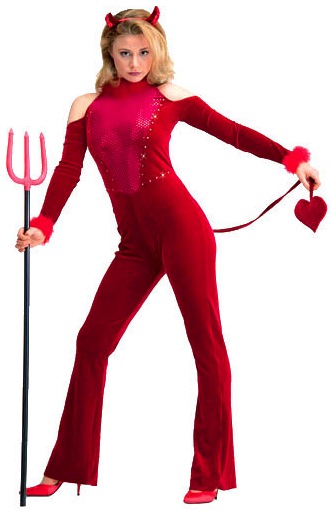 This… thing.. Is called the Sexy Female Devil Costume, which I cannot accept as being realistic by any stretch of anyone’s imagination whatsoever.

It comes with the catsuit, the horns, and the really poor tail.

Pitchfork and shoes are not included and it sells for $49 US.

And I wouldn’t give the company that sells this 25 cents if it was the last costume on Earth.

I can’t understand why anyone would see anything sexy in this costume. I don’t believe the model does in the way she’s holding that lumpy excuse for a tail or the look she is giving the camera.

I honestly thought that this was made of crushed velour when I first glimpsed this disaster, and even now I’m not sure that it isn’t to be honest.

I don’t like the fuzzy on the sleeves either for that matter. This isn’t a devil girl costume, nor is it a Succubus one either. All you need do is lose the horns, which are lousy by the way, and misplace the tail and all you have is a really cheesy looking outfit that you wouldn’t be caught dead in.

A well deserved zero out of five pitchforks.

I hope I never see this again…

Succubi Image of the Week 285