A Review of Carnal Kisses: Seduced by the Succubus by Lucinda Lovington 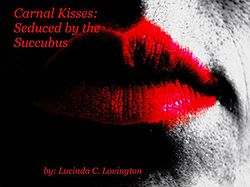 Carnal Kisses: Seduced by the Succubus by Lucinda Lovington

Generally speaking, Succubi are written to be dominant, and occasionally strong willed as well. Their sexuality really doesn’t come into question, but, their personality does. But what if that personality makes them more than what they do? That can be an interesting read…

The story is told from the perspective of the Succubus herself, though we never learn her name, what she really looks like, or anything about her personally. What she does to Tobias, how she hypnotizes him, controls him, dominates him to obey her… there is no doubt at all what those things are.

While the work is what I call a hot flash, it isn’t simply the sexual acts that are told of. No, more importantly to me the story tells of the Succubus’ longing for Tobias, her need to have him, to take him, and control him utterly. It also gives a glimpse of what Tobias feels, needs, and seeks but is rebuffed by those around him.

The setting is interesting as it tells of a past time, a moment when there was celebration of the coming of the solstice, the joys of the celebration, and the community at large. But it also tells of the disappointment in Tobias for being not chosen by the one be wants, the overwhelming need within him and how that attracts the Succubus of the story to him.

The Succubus has all the powers I expect to see, the ability to seep into Tobias’ room and control him are so very succubus-like as well. However she does not have horns or a tail. She is, however, not the only one of her kind, she speaks of her mentor, how her sisters act and more. She isn’t like them, she speaks of finding easy prey to be unsatisfying, that hunting difficult prey like Tobias is much more satisfying, more sweet, more rewarding to her.

All of this is important as it takes her from being a stereotypical Succubus into being so much more of an interesting character to me. Her dominance over Tobias is delicious and hungry which does not happen very often really in stories about Succubi.

The author’s grasp of erotica is excellent but I had one problem with the story. That being that the Succubus speaks in words and uses some terminology that, to me, seemed out of place with the moment in history that the work was set in. Using words like “retina” in conversation with a person that is unlikely to be able to understand what that means was jarring for me.

Would have like this to be longer, and some of the word choices need to be rethought, but overall a hot read about a dominant Succubus.