Succubi Image of the Week 284

A Review of Succubus at the Big Box by Keeta Kelly 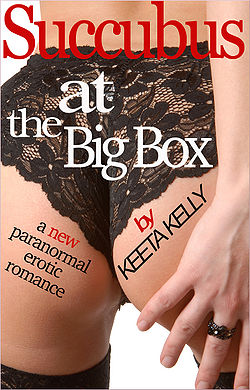 Succubus at the Big Box by Keeta Kelly

One thing that I want to see in a story about Succubi is that they have personality. Another is that they are stereotypical. And, if at all possible, I want to be, at the end of the story, pleased with everything…

I think that the problem with most authors writing about Succubi is that they have to be mostly demonic, generally evil, and in the end the people they come in contact with have something really bad happen to them.

But… What if, as I believe, the Succubus in question is good and what they do makes the life, or lives they change better.

That to me, is a really interesting story…

Keeta Kelly is a succubus who is trying to find pleasure at the local Mel-Mart. Not only does she find several ways to satisfy her own supernatural sexual needs, she manages to hook-up a boy and a girl who badly need each other, even though they don’t yet know it.

But what I really like about her is that while is calls herself a Succubus, she is also very human in how she lives and acts. That’s a pleasant change from a lot of the “perfect” stories that have been appearing about Succubi. She goes shopping, she does other things than have sex all of the time and she’s rather proud of that.

More so, she isn’t “evil”. She needs to have sex to live, and she’s okay with that which makes the situations she creates very hot and sexy to read. She also has her mind set on leaving those she is with better off sexually and otherwise than she finds them. This to me makes the entire story, from the beginning, much more than a hot flash. It makes it a story.

Having that story running throughout the work, giving Keeta purpose and a reason to do what she does makes the powers her has, including the ability to alter reality a little bit, make sense from the point of view that she isn’t hurting others, she’s freeing them.

And, oh yes, she certainly does free the two other characters. While there is a little bit of mind control going on, in the end they are better off together than alone and it really made the story as a whole special for me.

How the author writes about what Keeta and her playthings, and they are in a way really, have fun doing is lots of fun to read and that heat runs through the story really nicely. I might have liked a little more heat than is there, but really, it was some delicious writing to see…

There is a minor problem writing-wise in this work. A couple of times Incubi are spelled as Inccubi. This happens with some regularity, but doesn’t totally kill the mood of the story. Still, I think one more editing pass would have been a good thing overall. Otherwise the heat is very good for a hot flash and I could in my mind give Keeta’s voice a really interesting accent which made her more real in my thoughts.

Lots of heat, really good characters, and the Succubus I mostly do like. But it is too short and if leaves so many questions about Keeta that I would like answers for, but likely never will…