Succubi Image of the Week 283

A Review of Her Mechanic – A Supernatural Seduction by Lenny Boosh 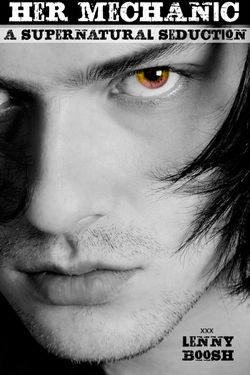 Her Mechanic – A Supernatural Seduction by Lenny Boosh

I think, at least I believe, that when you build a universe and write in it, you need to make it interesting, make things fit together and, always, always, make the reader care about what you have created.

It’s not easy to do, not by any means. But with the right idea, the right characters and the right moments in the story?

You can make something amazing…

The work is a tale of:

He’s just a human mechanic with a hot body. Or is he? Why do his eyes change color when he looks at her?

There’s only one way to find out if he’s her mortal enemy or her lover, and it starts with both of them stripping off their clothes.

He tells her to close her eyes and spread her long, beautiful legs. She knows that she shouldn’t let her guard down. She shouldn’t even be there, in his garage, and her Master will be so angry … but the young man smells so good.

While this is a short story, it isn’t a hot flash. There is story to be savoured, there are two characters that play off each other so very well that the attraction between them is perfectly written. The situation is, I admit, a little forced at the beginning, but once the faltering start is past and the real point of the story and the heat arrive… It’s amazing.

Agjalel, the Succubus of this story, amazingly enough, has a tail. It’s not exactly what I expected it to be, but I did find it a rather unique take on the Succubi. I also thought that the mythos around her was well done and I wanted to know more about Lovers and the world they live in.

While that was what caught me and held me in the story, it also was how perfectly Succubus-like Agjalel acted, what she discovered about herself and then Vincent added much more to that pleasure.

We really don’t learn a lot about Vincent, and to me that’s a shame because so many ideas, hints, and suggestions about who and what he is appear in the work. When the climax of the story comes, for both of them, what could have happened, and I expected the ending to be a sad one for all that was hinted at… Didn’t happen.

But the ending, while satisfying mostly… Came too soon. Much too soon. I could see this work being only the opening chapter of a much longer story with all of the universe that surrounds Agjalel and Vincent… I really wish that would appear someday.

There are a few minor spelling mistakes in the work which fortunately are in the few few pages before things get really interesting. The writing is wonderful, emotional, and draws you into the story I found myself wanting the hopes of Agjalel about Vincent to be true, But it wasn’t only that. What really made this story work for me is that there is the connection between the two, the choice that Agjalel must make, and what that really means.

But then the story ends and… and I was left wanting for more. I can only hope that, someday, thre will be more… Because there is so much to be seen still.

I want more from this author about Agjalel and Vincent. A lot more. Because there is so much more to be told about them…