A Review of The Succubus’ Plaything by R. Rodriguez 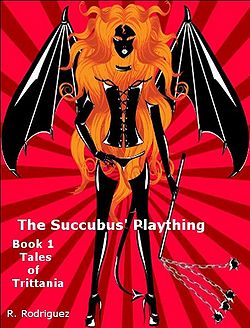 The Succubus’ Plaything by R. Rodriguez

It’s never an easy thing to begin a new book series. It’s harder still to write a story with characters you want to care about. Sometimes that doesn’t happen and that’s a shame…

This appears to be the beginning of a sword and sorcery series which revolves around a land called Trittania. This particular story following a knight named Wynne as he has an adventure. Overall I can’t say that I cared much about Wynne. He’s brutish, self absorbed, and violent to the point where some of the time I was skimming his actions because the blood and violence was too far over the top for me personally.

A Succubus appears in this story, who she is I will not reveal here, but it is very clear who she is when she appears in her disguise. Really it isn’t much of one and when the attack comes and Wynne is taken by her… It is unsatisfying to me. I cared more about the minor or companion characters in the work that the main ones and that’s a problem I think.

Still, by the end of the story is seemed clear to me that for the most part, none of the characters in this work would appear in a later story, should that ever appear from this author. It is difficult to have an emotional attachment to a story when, honestly, not one of them I cared about.

The Succubus in this story is very stereotypical in nature. She is evil, cunning, and plots the end of the world that she exists in. She has wings, but otherwise there is little told about her. When she is revealed as the Succubus, the story turns immediately to a short piece of erotica. She dominates Wynne, takes what she needs from him and then flaunts that. However, she does have enough in her to at least partially heal Wynne before she takes her leave of him. But she does so for her own selfish reasons and concerns.

The writing isn’t bad by any means, though the author needs an editor… badly. Several key points in the story were ruined by the use of a similar sounding word. At least one or two proofreads would have caught the errors and fixed those. I would also suggest to the author that creating a main character that has very little the reader likes makes for a more difficult story to read.

The story universe could be interesting, there is promise in it, but telling only stories of battle, hacking and slashing isn’t all that much of a story. The author did leave some characters alive and in a kind of cliffhanger position. In in all of them I only cared about one and that was because of all of the characters in the story, she was the one that I did want to know more about. To be honest, I didn’t even care about the Succubus at the end of the story and for me that is rather a shocking development.

On final point. The author was originally R. Rodriguez, but then this work was released under the name Sally Duncan, which I believe to be the pen name of the original author. I can understand to an extent why this happened, but it bothers me slightly…

Could have been a lot better, wishing it was…