A Review of Izzy’s Incubus by Leila Brown 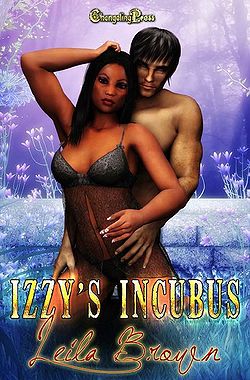 One of the things that never seems to appear in stories about Succubi and Incubi much is… what their families are like, what they want, and what happens when humans get involved. Even if that is by accident…

Sex on her own terms. That’s all Izzy wants for her birthday. A night of no strings attached loving — and no way she’s going to a bar to get laid. No thank you. Then her IM friends talk her into the craziest plan ever — casting a spell to trap a demon lover for the night.

The last thing Izzy expects is for the summons to actually work! But when she tries to reverse the spell on Tall, Dark and Demony, something goes terribly wrong. So how do you get rid of a sex demon once you’ve called him from the other side?

Izzy, properly known as Isabella, has some problems in her life. One is a complete lack of pride in herself, the other is a boss that is a twit, uses her, and thinks nothing of making her work for him during her vacation time. So, in short, she’s miserable, she has no sex life, and she wants to change that.

And, of course, the best way to do that is to summon an Incubus, use them, and them make them leave. But things don’t quite work out that way….

There is a lot not to like about Izzy to be honest. She’s unsure, she doesn’t believe in herself very much, and most of all, she thinks that being a woman with some curves on her makes her undesirable. In the world now, of course, the thinner you are, that seems to make you sexier, which I think is a lousy means to look at one’s self. It’s unhealthy for one, and to me it just isn’t right in a lot of ways.

The problem is, when she meets Amar, the Incubus of the story, Izzy makes so many mistakes, trips up over her own view of herself, and assumes that a question asked of her is a rejection, that her walls come up, Amar is stonewalled, and pushed away… over and over again.

It takes so much for her to believe that he wants her for who she is, that even in the deliciously sensual moments between them, the voice in Izzy’s mind keeps telling her that Amar doesn’t want her. That becomes a bit old by the end of the story for me at least, though through it there is a good deal of character development at the very end of the story which seemed a bit rushed to me as well.

Amar is the Incubus of the story as I have mentioned. He is very dominant in his personality, and at first he is, for the most part, a very gruff, typical Incubus. That disappointed me at first, but, for him, there was a lot more development through the story which pleased me a lot. He is not, by far, the same person he was at the beginning of the story. We don’t see any horns or tail on him, just some interesting purple eyes, which is interesting, but otherwise he’s very much the sex demon as Izzy finds out through the story.

The character that I wanted to know more about however was Amar’s mother. We never know her name, and I wish that was revealed, but she is a mother, and I love her personality so very much. She cares about her children and her response to Amar and Izzy’s relationship was wonderful. It was the right mix of a mother’s love of her son and the planning of a demoness of gaining more power in their domain.

I’m not sure she is a Succubus however. While she appears and we see her reactions, there isn’t a clear description of her, what she is, or much else about her. I would have liked to know, I have my suspicious, but I’ll never know for certain…

Written well, there were no huge errors in the story style or content wise, and it is a complete story which was also nice to see. I felt that the ending was a bit rushed however, it could have been about eight pages longer I think just to tie up some loose ends. Otherwise it was overall a nice hot read…

I’ll give this story four pitchforks out of five.

Loved Amar’s mother, she reminds me of someone… Amar was more than a simple incubus, which was nice to see as well… Izzy… Izzy needed a bit more explained which I think would have pushed this work closer to a five…

Perhaps there will be a part two sometime, but I doubt that will happen…