Succubi Image of the Week 279

A Review of Demon Lover by Wayne Nix 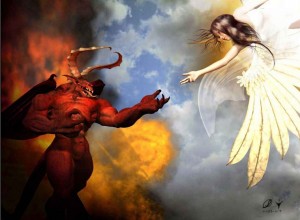 Time for a review of a story that isn’t about Succubi, and it sort of isn’t about Incubi either. There is a demon in the story, there is a summoning, and there is, of course sex involved…

A quiet librarian finds an ancient book and summons her demon lover.

That summary is a bit short so…

Liz is a librarian, she’s forty, and she is curious. She goes to an estate sale and discovers a book there titled Demon Lover, takes it home and discovers that it holds the secrets to summoning her own Demon Lover. She can’t resist the idea and does so… and things get interesting for her, and the Demon, from there.

I didn’t really think much of Liz, she seemed very much the schemer and while some of the moments with her in her bathtub are hot, the summoning has more gore in it than I personally like. As well the idea of her “thrusting” a burning piece of paper into herself and then having smoke come pouring back out afterwards was… a bit much honestly. I understand that it was part of the summoning, I get that, but, really it made me cringe.

The demon she summons is male, as you might expect, he’s a bit different than the typical Incubus in several ways which I won’t describe here, but needless to say when the two of them get together is it a very dirty scene. I would have liked him to be more than what seemed to be a stereotypical sex demon, but his language, appearance, and actions really didn’t make him more than that.

The last thing that made me stop and wonder was the moments after the sex when questions were asked and Liz did something. For all of the steps she had to take, I would have thought that she wouldn’t have been able to do what she did.

I know that’s vague, but it ties into the twist at the end of the story and while it was funny to a point, I think that it didn’t do the story justice. All of the build up and story telling for a one-liner?

Not sure that works honestly…

Some of the language is a bit odd, but that I think is because the setting seems to be in England somewhere and I’m not familiar with some of the words used. A bit on the bloody side of things and the ending was unexpected by far.

Not really sure I would want to see this story continue, but if it did I know who will be in control from here on out…