A Review of XXXtra-Natural by Lacy Fairview 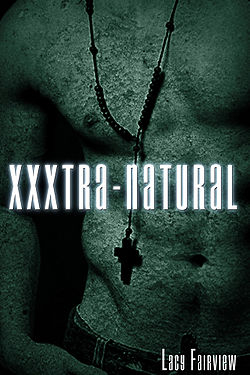 I can, to a point, understand why Succubi are used as minor characters in a story. They can be a threat of some kind, they can be a means to install strife between characters. Succubi are used as trickers very often as they can transform themselves to hide, confuse, and attack… But generally speaking, some how, some way, the story about them always turns towards sex… Whether or not they are actually part of that moment depends on the author really…

Adopted brothers Sal Smith and Dan Wesson hunt the things that go bump in the night. While on a routine kill, they start to feel urges they’ve never felt before towards each other. Will they give in? Or will the demoness they’re after get the better of them?

This is another hot flash story with little character development, story, or really much else save for the moments of sexual tension between some of the characters.

There is a Succubus in this story who is named Agrat Bat Mahat by the author. There is a Succubus named Agrat Bat Mahlat in Zohaistic Qabalah, who is known as one of the four angels of prostitution. I believe the author wrote the name incorrectly, or changed it slightly. However, considering the legends of Agrat Bat Mahlat and the Succubus in this story, who is known as the daughter of illusions, and as well the ruler of the western quarter of the world in this work, which matches with the legends, I have to assume that the two are the same being.

In this story, she is quite evil, appears in her more demonic form, shapeshifts into other appearances and uses illusions to control others as well as her other Succubus powers. Thus, she is a classical Succubus really in this story for the little that we see her.

She has one sexual scene that is really more horror in nature, and the other times she appears she doesn’t really come across in the story as a Succubus to me personally through most of that. She does however use her powers to control one of the main characters to an extent and she does threaten to do some things to him in a sexual nature.

How that turns out I won’t spoil, but I will say that, to me at least, she was simply a means to an end. That being the eventual moment were the two male main characters in the story have their moment together before the story ends.

I can’t really say that I enjoyed this story from my personal point of view which is to look at what the Succubus does, who she is, and her place in the story. She seemed too stereotypical, too cardboard, too…. too lifeless really compared to the rest of the characters and story.

The problem is, of course, that it is a hot flash story that isn’t set up for any other purpose than to get to the main moment of sex in the story at all other costs. It’s a shame really because there are hints of a hidden background for Agrat Bat Mahat, and we never get to see it for the rush to get to the end of the story and the heat that it produces…

Very little for those that want to read about Succubi really, no real character development either. A hot flash for some with a hint of horror and terror…

But much too quickly done by far for me personally…