My gift is… You. The Succubi Queen’s Birthday Manip

A Review of Sophie’s Present by Anne Kane 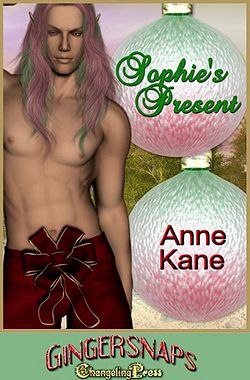 While it isn’t Christmas, and this might seem to be an odd book to review this time of year, it is a book with a sex demon as one of the characters.

Not quite an Incubus, but in the overall scheme of things that can be overlooked for a good story and good writing.

This particular story is one of a rather large series of books that Changeling Press has released over the years that have a Christmas theme in them.

And, of course, Christmas is for giving and receiving isn’t it?

The story is a seasonal story of:

As one of Santa’s elves, Dandy’s job is to make sure no one is forgotten at Christmas. So he made his list and checked it twice. He found Sophie at the top of his list of forgotten do-gooders, and when he checked her out he knew just what to do to make her Christmas the merriest ever.

When Santa made his rounds Christmas Eve, he dropped off a fantastic hunk at Sophie’s house, gift-wrapped for the occasion. Nickolie is a sex demon, and once she gets over the shock, Sophie has a wonderful time unwrapping her present and making sure it gets a good workout before it expires on Boxing Day.

The first thing about this story is that there is a lot of humour in it. There were so many moments through the entire story that will stay with me and make me smile for a long time to come. Probably the funniest one being that sex demons make themselves look like little blue dust bunnies in order to have women bring them into their homes. That has to be the most original, cute, and hilarious method that I have ever hear and I give the author’s imagination top marks from that idea.

I also liked that Sophie has a life and we get to see a bit of that in the story. She has her own personal problems with her family, and that comes in to play a little bit in the middle of the story, but the more important thing is that she is a good person and she does good as well.

But, and this is the interesting part for me at least, when she is tempted by Nickolie, when he tells her that he will be there for such a short time and then she’ll never see him again, she goes from Miss Nice to Miss Naughty in about three seconds. Now I can see that considering that a sex demon is doing things to her that she’s never felt before, that some of her deepest fantasies are coming true, and she’s cumming, a lot as well. But the shift felt wrong somehow to me at least. I would have expected a bit more resistance to Nickolie, or if not that, then a bit more introspection at what was happening.

Nickolie is, at least to me, an example of a “good” Incubus, though he doesn’t like to be called good in the story itself which leads to all sorts of things happening to Sophie, none of which she minds very much… Nor would I really but that’s another story… He is simply raw sexuality which is what Sophie needs most of all in this story. I would have liked to know more about him, some backstory, but that isn’t the point of this story. The point is the sex and passions between them. There is a moment of interrupting in the story that told of Sophie’s family, who I think nothing of really. Her mother sounds awful and her brother certainly is.

This story is more than a hot flash really, there is a bit of character development, there is background, and there is a future hinted at as well. So that makes this story more enjoyable for me at least. The author has two characters that live through the story, a world that, while we see little of it has a bearing on them as well. There is structure, something that hot flashes do not have much of either as well.

It’s a story well told and well intended to be a bit more than you would expect at first glance. But while it is that, it is short, there are some gaps in the story that I would have liked explained, and, at least for me, ending the story early, before Nickolie must leave felt wrong. Perhaps the author didn’t know how to end the story with the two of them parting ways, or not, or both?

If that is the case, then I can understand why it ends where it does. That doesn’t mean that I have to accept that however.

Funny, sexy, smart and a really good read. But too short, and so many questions left unanswered the main one being, where does, or if there is, a relationship between Nickolie and Sophie. I hope there is for her sake, but we will never know will we?

I need more of the story to be told, but it isn’t and as much as I want that to happen, that hurts my rating. I still recommend the book however. The humour, the heat and the passions make it worth reading…

Just would have liked a bit more than we see.