Succubi Image of the Week 277

A Review of Taken by the Incubus by Arianna Moon 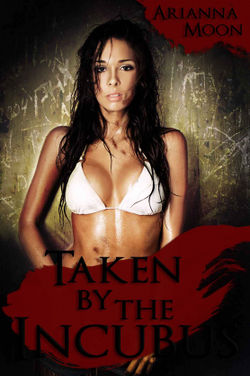 Taken by the Incubus by Arianna Moon

It is, I think. relatively difficult to tell a story from the first person point of view. It’s not that it can’t be done that is the difficult part, what is comes to how easy it is to repeat yourself over and over again. The echoing of the same thoughts whether by purpose or design can make for reading that is less than satisfying.

There is, really, only so many times you can talk about something. Whether that be sexually, emotionally or otherwise, going over the same thing just makes for a story that cannot keep my attention.

When that is then joined by taking a myth, such as the Incubi, and changing them, not so much from what is expected as taking them to a characterization that is not satisfying then adding to it no story, but much rough sex… I just don’t know…

A young woman who doesn’t believe in the supernatural experiences the revelation of a lifetime when she unwittingly frees an evil inubus from centuries of imprisonment.

A woman, who’s name is never revealed, buys an idol in South America, takes it home, does something she was told not to do with it and then releases an Incubus into the world. And she becomes his first plaything to enjoy.

There are a few things that I thought were well done. There is quite a lot of mind control erotica in the story, which is done well and I rather liked how she slipped under the Incubus’ control. The initial setup of the story I found really well done as well, and I was looking forwards to seeing where the past fitted into things from it. I also found some of the hot moments of the story with a nice bit of heat too.

But then I also have some problems with the work as well. While I know that each author has their own idea of what Incubi and Succubi look like, there are some forms that I personally do not care for. The form the Incubus took in this work was not all that appealing to me for one, and as well the personality they had, and how they acted, were a real turn off for me when it shouldn’t have been.

I personally do not like brutes and this Incubus was one. While I get that he was meant to be and what he does in the story is meant to be brutal as well, that doesn’t mean I have to like it or enjoy it. I admit I am a romantic at heart… this Incubus isn’t. While most of what he does is made possible by mind control and so on in the story, it’s the… almost cold way he acts that just takes the heat out of the story for me at some key points.

Which brings me to the unnamed woman in the story. The work is written from her point of view, which is fine and gets her emotions, needs and actions across… I would have liked to have known her name. For that matter I would have liked to know the Incubus’ name, which we don’t, as well. I found it hard to put myself into her position for several reasons, and in the end I gave her a name so that I could get into the story better.

My own personal view of things has a lot to do with that I would expect. While I found some of the scenes a bit much for my own personal taste, they have heat in their own way and they do tell the story of submission which, in the end, is the point of the story I feel. It’s just that I think there could have been more to the work than just submission or loss of self.

But I probably won’t.

It’s a hot flash at heart with just enough story to make what happens make sense. Bit too harsh for my tastes, though I am sure that some will enjoy what transpires none the less. It would be a good opening to a larger story of what comes after this moment, but as it is… It’s lacking some…