Lilith the Perfume… just not sure about this…

A Review of Lies and Deceit by Catherine Forbes 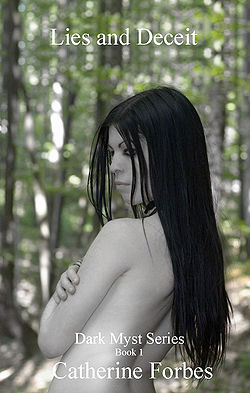 Lies and Deceit by Catherine Forbes

This week’s review is of a story that I found on Smashwords quite some time ago. I’ve been holding off reviewing it as I had hoped that the next book in the series would appear and then, I hoped, I would have a better idea of what the author was planning in their story. That didn’t happen, I regret to say, and so…

So I will have to imagine where the story might have gone from here, the stories that could have been told, and wishing for something that it seems I will never see…

But I won’t stop looking in case it does…

Mystren and her kin are from another world, one that was supposedly destroyed. Now, they find themselves in a new world dominated by destructive beings – humans. As the new long-eared race try to take over, they start a war with earth’s supernatural creatures.

Vampires, gargoyles and incubi are just some of the creatures that have banded together to stop this invasion.

Now Mystren is captured and alone. She braces herself for death, but her captors have other things in mind.

Mystren is on a mission to investigate a place where some of the enemy of her kind call their home. Though she gets into the place, and finds some evidence, things go wrong and she is captured. Her captors confront her with what they say is the truth, which she does not believe and then… then the story comes to an abrupt end.

It’s an interesting beginning to what I hope would be an interesting view of what humans are doing to the Earth, what we believe to be creatures of myth and legend, and a new, orphaned race that need the Earth for their own reasons.

There isn’t a lot of explanation of what, or who, exactly, Mystren is exactly, nor who she is working for, or beholden to. Nor does the story really begin to explain why the myths of Earth are defending it really, save the one truism that free choice matters, no matter how wrong a choice may well be.

As well, the creatures she encounters, and that imprison her, are shown, and save their names, and what they represent, not much else is discovered or revealed about them. It is quite clear however that one character, Harrison, is an Incubus, and as well a reference is made that Succubi exist in this universe as well.

But there isn’t anything else said about them, which disappointed me to an extent. There is a small amount of interaction that occurs with Harrison, but otherwise the story isn’t about him, or the other beings that Mystren encounters save for little tantalizing tidbits and observations that do not, really, build on the story very much.

It is, to me at least, the opening chapter of a longer story and I have to say that I would have wanted the author to write the entire story and share that rather than give out this little preview of their universe.

It feels far too much like being teased and that has always bothered me.

There is a story here, quite a good one I think that doesn’t seem to be treading on the path that so many supernatural themed stories have in the past. The author writes well, Mystren has soul, a will, and a purpose. Those that she meets have obviously a past and a goal as well. So in doing this, there is conflict, and a plot for the story to move forwards on. But it is short. And honestly I think that another five pages or so of fleshing out the characters would have made the different for me personally.

A good start, the characters start to be interesting and the story more so, but then the sudden ending was very disappointing to me. More that the next story didn’t, or hasn’t appeared at the time of this review appearing on the Tale.

Still, perhaps someday it will.