That Is This By TeraS

A Review of Carnal Kingdoms: Portrait of a Succubus by Adrianna Black 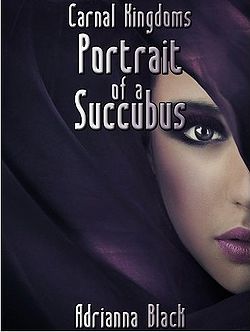 Carnal Kingdoms: Portrait of a Succubus by Adrianna Black

How does a Succubus enter one’s life? For some it is a spell cast. Others a book opened. Still others find them adventuring. But sometimes, all it takes is entering the wrong shop and buying the wrong painting for the door to open for them…

The question is, if that door is a boon or a bane. Sometimes it can be more than both and then some… But in doing so, can the horror be tempered by something more?

Carnal Kingdoms: On the world of Amor, seven kingdoms rule over land with an iron fist. Each realm is divided, with none able to trust or coexist with the other. Fear and panic crosses the continent as the frightening creatures from the wild lands close in from every conceivable direction. The time has come for each faction to stand against the hordes and unite the world under a single banner. In the carnal kingdoms, love doesn’t just sell; it rules.

Portrait of a Succubus: In the thriving kingdom of Stonewall lies the metropolis of Wesmore; and in that metropolis, a secret that has been masked for a thousand years, biding its time before revealing itself to the unsuspecting denizens of the city.

This story begins when Vivian Pasternak arrives home with her latest acquisition; a beautiful piece of artwork that has been known to change the lives of any that dare call it for their own.

Vivian, and her husband, Jacob, must come to this shocking realization before their lives are consumed by an evil spirit that has survived for generations off the souls of the weak and demoralized.

From the beginning of the story, it’s very hard to like either Vivian or her husband Jacob. Neither of them are much more than what they appear to be on the surface, a couple that are together for the sake of convenience and really not much else. The undertone between them is a battle of dislike and barely held revulsion towards each other.

This of course sends Jacob off to the local hookers and Vivian spends her time looking for things to by to keep her mind off of the mess that their lives have become. As this unfolds their sex lives are both, really, nonexistent and barely touched upon.

As the story is told, each chapter is a moment from either Vivian’s or Jacob’s point of view. There is some self examination that almost, but not quite gets to the point where either of them could repair their marriage, not that they would actually ever think of doing so.

The catalyst in this story is an old pawn shop with an even older woman in it that sells Vivan a painting, which she is told, is called Portrait of a Succubus. The way the author causes this to happen felt very much like a spell was cast over Vivian or some mind control was used on her. Either way, Vivian’s confusion is very real.

The painting itself is not described in detail, which is nice as it allows your own imagination to fill in the blanks. Eventually of course, when the painting is in their home the Succubus appears, and she is most certainly one.

Very sexual, but very dangerous as well, she captures them both and the events that proceed from there are well done and telling I think as well. The Succubus is, in this story, very much a being of evil and her actions are just as much so.

How everything is tied up at the end of the story was a surprise. Not in where the painting wound up, but in what it meant to the old woman in the shop and her relationship to it. I thought that was very interesting and I was disappointed when the story came to its end.

This work in one of a number of stories by this author set in the same universe in which “normal” humans come to face all kinds of supernatural beings. This story having, of course, a Succubus in it, but references are made to vampires in this story and there are other beings as well.

I did not read the other works in this series, to be blunt, this was the only one with a Succubus in it and the rest had no real interest for me. The world these stories are set in is well thought out, but some parts of this story made me pause and work out where, technologically, this world was. As gold coins, silver coins, and other items are mentioned, I have to assume that it was set in a more or less Victorian age.

And that’s where my one problem with this work appears. If this is in a time that is in the past, or at least a time that isn’t modern, then some of the spoken words by the characters do not quite fit right to me. There is a lot of older phrasing and structure in their spoken words, but mentally there seemed to be a more modern thought process in them.

I could be missing something, that’s true, but even so I have to wonder if some tweaking of the language in this work wouldn’t help the story some. As well, while I understand that the focus of the story is what happens to the none too happy couple, there are quite a number of questions about the Succubus left unanswered and I wonder if extending the story a bit more couldn’t have closed them up or at least given a proper look into the Succubus herself and how she wound up in that painting in the first place…

Well written, a telling story, but full of pain and strife. But too short by far really and that’s the problem… I’d like to know more about the how and why of the Succubus and that doesn’t happen.