A Review of Demon Draw by R. Moses 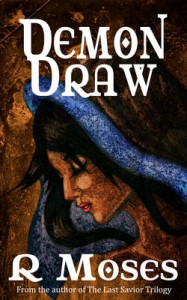 Not all stories that have Succubi or Incubi in them are designed to have them as the focus of the story. I personally don’t mind that. In fact, if the story as a whole is something more, something telling, something… special, then I find that really does make things so much more interesting.

I don’t like it when the Succubus or Incubus is simply used as cannon fodder. To me that’s a waste of a character. When they can be used for the betterment of another character, even if that means a threat looms in the future, that really makes things more of a tale than it would otherwise be.

A city old in prestige and hate…

A woman torn between duty and love…

Valena is a prostitute working for the Holy Church as a demon draw. Her deadly mission is luring demons to her bed so she can collar them and send them back to the pit from which they came. Her lover, also a demon draw, is sent on an assignment to lure a succubi-without any weapons. The church refuses to allow her to help her lover. Valena suspects the church wants them both dead…

Does Valena save her lover or obey the church?

The world that Valena and Tana live in not an easy one. They are trapped in an agreement with the Church which has them live their days as the lowest of low and at night risk themselves to kill demons for the church. The one they answer to is overbearing and powerful, but also is a threat to them both and all those that call themselves Demon Draws. As time has passed, Valena has seen others vanish over time until she and Tana are the oldest of them left. Their days are numbered and the one that lords over them seems intent on removing both of them… if he can.

As this work is set in a universe that is one of swords and sorcery, there are demons summoned, magic powers wielded and those with power are pulling the strings from the shadows. There are moments in the work that are a little uncomfortable, but again it is the universe that the story is set in. But it all makes sense and that is what really matters.

This is not a work of erotica, far from it. This is an adventure story of two women trying to survive against a world that sees them to have no value and wants to keep them that way. It is their own strength, their own intelligence and their actions that matter and they really do.

The Incubus and Succubus are seen for a short time, long enough to threaten them both separately within the story. They are not sexual so much as they are violent powerful beings who toy with their playthings before they aim to do unspeakable things to them. The descriptions of both make them not quite as i like them to be, but that’s perfectly fine. They aren’t meant to be anything but beings of evil with a single purpose. Except for the Succubus. She’s more than she appears to be as both Valena and Tana discover.

It is really well written with moments, scenes and actions that are painted vividly in one’s mind. While is it a short story in length, the writing makes the work feel longer, more involved, and more expressive that one would think in the length that it is. An example of a writer that knows their craft well, their characters more so, and new what and where they wanted the story to be when it was over.

Wonderfully written, truly an engrossing work with characters that I wanted to be with every step of the way. I found two other works by this author that I will be reviewing on the Tale in the future and I expect them to as wonderful as this taste of their writing was.