A bemusing piece of Succubus jewelry…

A Review of Pandora’s Box by Amelia Elias 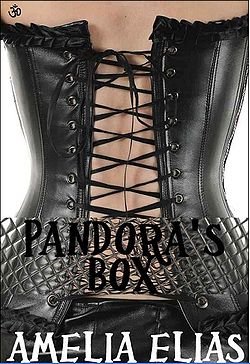 Another story about Incubi this week on the Tale… And I do mean the plural. A story with one Incubus is hot enough, but two of them that want the same woman? Oh that could well really be interesting… And if that woman is named… Tera?

It has to be something that I just have to read don’t I? And if, by chance, that Tera changes one of them and for the right reasons?

Then things, at least for me, get really interesting…

When her pent-up sexual frustration attracts an incubus, Tera can’t resist tasting the pleasures he offers. Rowan is lust incarnate, a consummate lover whose merest touch fires every sexual part of her body. He knows how to touch her, how to kiss her, how to melt her resistance and make her ache for more. Every moment together raises her need to new heights, but every sexual encounter drains a little more of Tera’s life force.

And to make matters worse, Rowan isn’t the only incubus who is drawn to her need. Troian is older, stronger, and ruthless, and he wants her for his own. Only Rowan’s claim prevents Troian from taking her for his own.

Tera’s been unlucky in love before, but never like this. To leave Rowan is to risk her life at Troian’s hands, but to stay is to risk her heart and her very soul.

Tera is a strong woman, but also one with a major flaw in her character that haunts her. That theme runs throughout the story and it, eventually, helps to guide her to a decision. She also discovers in the course of the story that she is special and the why of that is the reason for both Incubi to come to her, and to want her.

Rowan, who we see the most of through the story of the two Incubi, starts out being a classical Incubus, there’s really no other way to describe him. While he is tender and tries to not cause pain, but pleasure, the end result is that he will, eventually, kill whomever he takes energy from to survive. The story, which makes that very clear, is one of Rowan being taught lessons about being human, what emotions are, and discovering that even a demon can discover one of the most precious things in the universe. Love.

Troian, the “bad” Incubus for lack of a better word, is all evil, all of the time. What he does over the course of the story makes him that, and more. What he takes from Tera, what that results in, and what it fixates Tera on, I think was a perfect catalyst in the story. He isn’t seen much, but then he doesn’t need to be for what happens. To be honest I think we got well enough of him as it was and I really didn’t need to see anything more of him to understand him. And I have to admit that I kept reading his name as Trojan several times, which gave me all sorts of giggles when condoms appeared in the story or were mentioned.

The other main female character, Wren… I loved her, probably as much if not a little more than Tera in the story and what happens with her, the secret she didn’t share and the choice she made… I understand it, and in a way I think that most would understand it as well. But, and there is a but, I would have liked to see more of her. Her attitude, her connection with Tera, her view of the world and its secrets we really don’t get to see a lot of and I would have liked to.

Everyone has their own “voice” in the story, you know exactly who is speaking or acting, there isn’t any mistaking one for another which was nice to see. I also liked the moral and spiritual questions that arrived at the end of the story, which paid off the events within it really well.

The author shows great talent in writing and it really was a joy to be able to look into this world they created, the characters that they cared about, and the story that was within them wanting to be seen…

Wonderful, and I recommend this book highly.

Hot, so very hot, my namesake is adorable, and Rowan is amazingly tempting… I just wish that Tera would have become a Succubus, but that would have been asking too much really… And there is such a dangling plot thread that there should be a second story to follow… Not having that closure really, truly, is a shame.