A Review of Caitlyn St. Cyr by Cerys du Lys 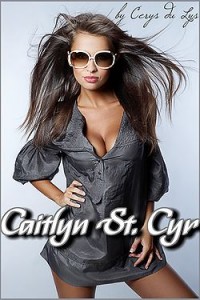 This week I will be reviewing the second of two works by the author Cerys du Lys. The first had an Incubus as one of the main characters and you can find that review here.  This week’s review is of her Succubus themed story.

Not all Succubi have to have horns and tail to be one. But one of the things that does happen, often, is that they are the ones who are blamed when events transpire which might, possibly, be their fault. The thing about that is, those that think they know Succubi, quite simply do not. This work is a prime example of how that is very true.

When the cops come busting down Caitlyn’s door, she’s none too happy. Though when they offer her a detective job, she accepts, despite the fact that as a succubus she’s also one of their prime suspects in this case involving missing souls.

They don’t know how she solves her cases, and she’s not about to tell them. They probably wouldn’t like it either way.

Entering one of the soulless victim’s dreams, she gains some information before letting the man mindlessly ravage and impregnate her in his dreamworld. A little kinky for her tastes, but it gets the job done. Unfortunately it’s not enough.

Next on the list? One of her favorite informants, Sam. The one-eyed cyclops man has a penchant for domination, even in his dreams, and to get the information she needs, Caitlyn has to submit to his will.

It’s a tough job, but someone has to do it. In between the sex and conspiracies will she be able to discover who’s been removing souls from their bodies and using them for their own devious means?

This work has the feeling of a film noir piece for me at least. The atmosphere is in a way a mix of a pulp detective story mixed with a smidgen of the supernatural. The two worlds mesh well together, not an easy thing to do for a lot of writers that I have read. They tend to make one or the other be more overpowering and that hurts the other side of the story. But get the mix right, as in this work, and it’s something special.

Caitlyn is a Succubus Detective. While that might seem odd, I liked the how and why of it all. The how of how she gathers information. The why of why her powers work they way they do and why she must do certain things to make them work. It’s a nice mix of ideas overall, but in particular I found how the dream world is translated to the real world quite different. While Caitlyn is a Succubus, and a demon, she isn’t the stereotypical kind nor is how she slips into the dreams of others the typical means used. I rather liked the concept and how it was portrayed in the work as a whole.

Caitlyn herself is a force in this world. She’s headstrong, she takes no baloney from others and she has her own problems to deal with. I liked that she would stand her ground but not in a fight or something like that. She’d rather use her mind and prove herself better and smarter than the police and others around her. I think she’s of the view that you speak softly and carry a gun, but you use the gun when there isn’t another choice. She’s rational and knows what needs to be done and isn’t afraid to do go as well. A really good strong female lead in a universe where it felt like there weren’t many of them to be found.

It wasn’t just getting into a dream for the sex, it was getting there for a reason, Caitlyn’s own reason, and the resolution of the premise of the story, when it came, really fit well into the overall world the author created here. The question though answered wasn’t resolved and that did, I hope, mean that there could be more about Caitlyn someday in the future.

There is a lot I would have liked to know about this universe that is hinted at but not really explained. In truth it didn’t need to be to make the story flow right, but I found myself wondering about the demons mentioned, the supernatural world and how it clashes and become entwined with the “normal” world. That’s an interesting story to me and I would have liked more about that. Perhaps we’ll see Caitlyn again someday and her story will continue.

I really like Caitlyn as a Succubus, but more so as someone that thinks instead of just acting. And in the thinking comes the story of who Caitlyn is. That really kept me involved in the work as a whole. I’d like to see more of her sometime. There’s a lot more to tell that hasn’t been as yet.