Possibly the worst YouTube about Succubi I have seen… 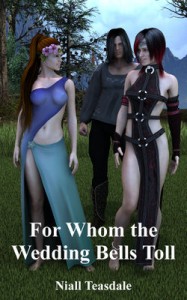 For Whom the Wedding Bells Toll by Niall Teasdale

I’m of two minds this week on the Tale… One is that I am quite happy that the thirteenth book, he calls it the eleventh, in the Thaumatology series by Niall Teasdale, For Whom the Wedding Bells Toll was released last week. Bu I am also a bit sad in that it will be while before we see more from Lily and Ceri… and I’ll miss them both a lot.

What would you do for a friend, one that means more than the world itself?

Twill had always had an enigmatic side. She seemed nothing more than a housekeeper, all be it a fairy one with secrets, but things are rarely as they seem. When dragons threatened her friends and the entire human world, Twill revealed herself as Gloriandel Wintergreen, daughter of a powerful fae family who ran away from an arranged marriage a century ago, and now she has returned.

Ceri, Lily, and Michael, invited to the wedding, are determined to stop it, but things are never as simple as planned. Soon they are embroiled in politics, intrigue, murder, and a rebellion which threatens not just the fae Otherworld, but the human world as well. Can they prove their own innocence and save the world… again?

There is a part of the Thaumatology universe that has been hinted at, but never really explored. The question of the Fae, their world, their existence has been on the edges of many of the stories in this series, but never really delved into. There were hints of their power, their influence, where they acted on the Earth, but nothing really definite or something that you could point to and say… that’s how it all works.

That all changes in this work. The inner workings, powers and more of the Fae world meet up with Ceri and Lily as they try, so very much to protect their friends. And in doing so we learn something about what to me has been something of an icon or rock in Ceri and Lily’s life for a long time.

Twill. Possibly the most mysterious being in the Thaumatology series that I can think of. I think that because we didn’t really know all that much about her it made her not the most active or the most powerful being, which she isn’t. But it did make her the one character in the series that you had to think about and wonder about from the moment she first appeared. There was an aura around her that you knew something was different about her.

And in this book, all of her secrets come out fully. Her world, her family, now and why she came to be with Ceri and Lily. Everything that wasn’t said before… is. But here’s the most important thing about this work. While we learn her name, her true name, that name is not who Twill is. And for that one important point and how the story goes from beginning to end… That’s her being true to the Twill we have known throughout the series.

In meeting Twill’s family I can see why she wanted to leave and how in spite of all that goes on now to her and to her friends her family cares more about power and position than anything else. It gives full voice to how Twill became who she is and why and it explained so much of her personality.

There is one certain fairy that appears with Twill when Ceri, Lily and Michael arrive in the Fae world that I fell in love with from the first moment. It’s good to see her… not quite grow up but realize that she can be and do more than she thinks she can. Her transformation runs in parallel with that of the Fae world and Ceri as well.

There is a good deal of intrigue in this work and the reveal of the threat when it comes, turned the story into something of a perfect example of that saying “may you live in interesting times.” For Ceri and many others, they truly do. The path to the climax of that thread in the story goes in a lot of directions that I never expected. That’s the thing about Naill’s writing, the simple path isn’t the best one when you can made the story better for going off the beaten track.

By the end of the story, many of the loose threads from the previous works in the series are tied up, but then. of course, some new themes appear which gave me a smile. It was really something special to watch Ceri do things that she never thought she could, or would, want to do.

Lily of course appears in this work and she is a lovely talented Succubus as I have come to love. But while she is what she is, it does not make up all of who she is. Yes we see what Lily is capable of, but it’s much more satisfying to see her relationship with Ceri be all that is should be. I am, I admit, a bit put off with one piece of jewelry she wears, even if I understand why she does so. But Lily’s story is far from finished and there are still things to be told about her.

The same holds true for Lily’s father Faran who appears for a bit in this work. There is something more about him that is missing and someday I hope that story is told as well. There is a side of him that we haven’t seen and I would like to see it.

In spite of some of the threads being completed, there are a great many plots begun at the end of this work which will I am sure bring many more works in this universe to light. And that is, of course, the mark of a writer that knows their craft, characters and world.

Five out of five pitchforks…

Niall has said that this will be the last of Lily and Ceri… at least for a while. I will miss them and I know that I will be visiting them in their stories for years to come. I’ll wait, I am patient,.. mostly… Thank you Niall for creating something that has given me no end of joy to read…