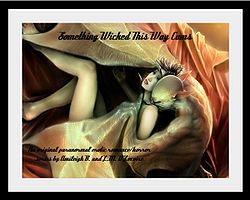 One of the things that I have problems with is when an author writes the beginning of a story and instead of focusing on the important things we need to know, they go off on tangents. In this case, while each of the Incubi of the story are introduced, there is so much to understand that the story gets lost in the telling…

The work’s summary tells about:

Three powerful Demons battle for control of middle earth in a centuries old struggle to exist.
Tinnea, the most ancient of the three, recently released from the pits of hell after being locked away by Moradieb for crimes against creation – He seeks to claim his unsuspecting bride and fill her with his seed until she gives him the promised son of prophesy, a Demon who will unite the underworld and finally enslave the fractured souls of middle earth for all eternity. Tinnea is determined to see his demon brethren placed upon the thrones of the heaven’s to rule over all Creation and will hunt relentlessly for Moradeib’s spawn for the promise of power that runs thick in her veins. He knows the truth of who and what her mother was, and knows that hers is a power more ancient and dark than any of them could ever have imagined.

Saldir, a sadistically perverse Incubus who feeds from the willing and unwilling alike with indiscriminate need – His insatiable thirst has left him with few followers, his lecherous, murderous greed legendary. His power continues to weaken with each passing year as he allows his hunger to destroy him, unable to find those who would willingly come to his bed and allow him to feed for fear of losing their very souls. It is only a matter of time before he is forced to abdicate his territories and serve his more powerful enemy or forfeit his soul. Could it be that the discovery of Moradeib’s spawn will finally re-awaken the former glory of his early days and give him the strength he needs to claim Moradeib’s territories for his own at last?

Moradeib, a cunningly seductive Incubus who currently controls the Southern districts and outer realms where the undead serve – The most powerful of the three ruling demons, he believes their kind should coax desire and feed only from the willing. His eager lovers on middle earth number in the hundreds of thousands; hungry, lustful souls who welcome him into their dreams and give willingly of their energies, responding to his practiced caresses as he seduces the truth of their hidden desires and brings them to life. Captivated by the sensual witch, Solange, he keeps her close as his favored concubine and cherished consort, aided by her undying loyalty in recruiting those who would serve him, body and soul. He has only one goal – defeat the vile Saldir once and for all and force him into servitude, claiming the pathetic demon’s scant power for his own and ridding middle earth of his deceptive seductions once and for all.

And each will seek the powerful blood of Moradeib’s daughter for their own, believing she is the key to victory. As she and her new lover begin to unravel the mystery of who she is, discovering the truth of her parentage as her powers slowly come to life, they find themselves plunged into a deadly battle for her very soul. It will be up to them to discover a path to balance between their world and that of the powerful incubi, working with Moradeib to defeat Saldir and Tinnea once and for all that they might create a doorway between their world and the next; a world of secret, carnal desires, where mankind and those who draw life from the whispered sins of their heated pleasures might co-exist.

I really didn’t enjoy this work for several reasons. First and foremost, the story has too many characters to follow in it. I didn’t understand what the author was trying  to accomplish in having, quite literally, close to twenty different major and minor characters appear in such a short period of time within the story.  I understand that there has to be the framework laid in the story, but, is it necessary to have all of the characters appear seemingly at once in different places and situations?

I think the author might have been better served in taking these three short, heavily packed stories about these Incubi and giving them each their own book to feature in. Trying to understand what is happening with each, who they are connected with, and what they intend to do cannot be, I think, explained in what amounts to an introductory chapter for each of them.

As this work was billed as being the start of a series about these Incubi, that makes me ask the question: Why do you need to overwhelm the reader? I don’t see why the author wrote the chapters they way they did. Each shift between the Incubi seemed oddly incoherent, unsure, and, at least to me, forced which made reading the stories a chore instead of being pleasant.

One last point about this work, and that is: Too much telling and not enough showing. What I mean by that is the author spells out every single action, smell, taste, and event throughout the story. That bothers me as there is little use for your own imagination to fill in the blanks or wonder about things in the story. In doing so, the story is harder to read and come to enjoy. Frankly, I didn’t.

I haven’t seen another part of this series, if it will ever be one, appear which is disheartening really. It’s overly complicated in plot and there are much too many characters, minor and otherwise, to deal with. All in all, just didn’t enjoy what could have been something more interesting if it was less frantic… The Incubi are interesting, but, being interesting isn’t enough when the story itself cannot support them.