Succubi Image of the Week 269

A Review of Succubus Rising by B. R. Kingsolver 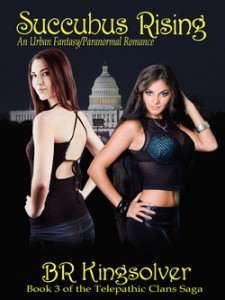 Succubus Rising by B. R. Kingsolver

In 2012, I reviewed the first two books in a new series by B. R. Kingsolver. You can find the review of the first book here on the Tale. I also reviewed the second book as well, and you can find that review here too. It’s been a little while, but at last the next book in the series has been released and I’m quite pleased to say that the story is as engrossing as ever. Some questions are answered, some questions are made new, but in the end one very important lesson is learned in this work…

The most important thing is to remember you matter to someone and they to you…. forever.

This, Book Three in the series tells of:

Rebecca Healy is a true wilder, growing up with no contact or knowledge of other telepaths. Discovered by a Clan member on the streets of San Francisco, she felt like she’d hit the jackpot. Finally, she knew what she was, or at least she thought she did.

When Brenna O’Donnell, long-lost heir of the O’Donnell Clan, and the strongest telepath in history, is returned to her family, she and Rebecca form a tight bond. Brenna has it all, looks, money, power, and men falling all over her.

Rebecca isn’t jealous, but it would be nice to find someone who would really love her and stick around in the morning. She’s intrigued by a handsome South American general, but of course, he has his sights set on Brenna. Carlos de Vargas wants more than love. His Clan has its back to the wall, and they hope for an alliance with O’Donnell. An alliance that would lead to war.

One of the things that must appear is some kind of conflict. In this work there is conflict from without, within, and between that conspire to drive people together and at the same moment draw them apart once more. There is the world view, the family view, and then the soul within that all make themselves known. The question is, however, if in the end all of them can be healed after going through the events that happen.

The one thing about this book I think that makes it more interesting is while the plot revolves around conflict between the clans and the ramifications of that, family, specifically Rebecca’s place in the family, really is the core of the story. To be honest I was more interested in seeing where her story was going than the overarching plot because, to me at least, the relationships and how they all change over time, was more riveting.

But there is war and in with that comes some political machinations that went in a direction that I didn’t expect it to. I do have to wonder about what exactly it does mean for the future course of the series however. Specifically one character’s comment that she’d rather enthrall everyone and be made Queen, but that’s another story isn’t it?

As part of the war that develops, we see someone appear that is… well, sort of the exact opposite of who and what the Succubi are in this series and to be honest I wasn’t all that upset with how little they appeared in the story. It does bring up in my mind the question of if there are those that believe they are Succubi and act like the myths tell, why isn’t that a real concern for the Succubi themselves?

There is a lot of foreshadowing in the story as well, and you can blame Rebecca and Brenna for that. While there isn’t really anything clear to point at, the moments depicted where… troubling in many ways. The aftermath and how that changes Brenna’s view of Rebecca is shattering as well. There’s a kind of fatalism in Rebecca that I had never quite understood in the series and now, finally, I can make sense of it all.

There are some moments in the story where I couldn’t help but cry. What made those parts of the story so hard to read wasn’t that they were about Brenna, even though some of the things that happen to her are dreadfully sad. They were about Rebecca and what happens to her, the gifts she is given by Brenna’s family, and, finally, the answer to a question that she’s had all of her life.

One of the lovely moments for the Succubi as a whole was the tale of Samhain and most of all the dress that Brenna appears in for that celebration… Deliciously Succubus in nature and truly a wonderful compliment for her personality and what she is becoming.

This brings me to Brenna herself in this story. There are some terrifying moments for her to face and what she suffers is something that was again a moment where the tears came anew. She grows in powers and who she is as well and in doing so something interesting is happening… She’s becoming more and more a truer representation of what I feel Succubi are. In doing so, and the new powers she discovers, it opens the door to a conclusion which, if I am correct, will have some wide ranging effects in this universe.

Many of the Succubi we have met in the series before appear and it is good to see them develop into their own places, abilities, and futures as this story goes on. But even as they do so, it feels like there is a lack of understanding of who they are and what they can do by many around them. It seems like they are still seen as being weapons of sex for lack of better words, and I have the feeling that this will come back to haunt those that still think this way.

Again there is a lot of family politics, and while there was a good deal of humor in that, I wanted that part of the story to be a little less again for the development of both Rebecca and Brenna. I think there are a lot of characters in the family and perhaps a tighter focus on the main ones would help a little.

There is a storm still brewing in this series and I have the worst feeling that it will result in not just Brenna, but everyone around her finding that the Goddess has plans for them all whether they like them or not.

The Goddess makes an appearance… sort of… I’m still hoping for her to actually appear. She’s someone that I wonder about throughout the tales, ceremonies, and words shared between everyone. I’d like to know her better… probably as much as Brenna does really. The vision of the future brings another thought about Brenna and the Goddess as well which would explain a lot of things too… But we’ll see what the future brings in more ways than one.

A story of the heart and the soul in many ways which I enjoyed immensely. Quite simply five out of five pitchforks.

The characters make the story, not the story making the characters. The promise of the series continues and that’s so very satisfying.

There will be a fourth book and I do hope it arrives soon… It’s not nice to keep one of the Succubi on the edge for too long you know… As well, a note from the author in this book notes that there will be a spin off series soon… That I do look forward to seeing as well…