A Review of Those Who Howl by Kelouisa 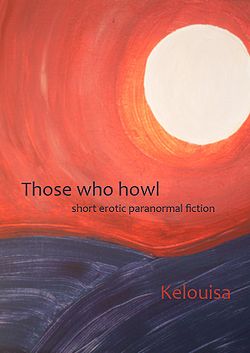 Those Who Howl by Kelouisa

I found a collection of an author’s works that has in it one story about an Incubus. And that story is a bit different from what you might expect from a story about them which makes it interesting to me…

The book is a collection of:

As this is a collection of stories, I will be reviewing them individually and then give a rating of the work as a whole.

Territory – A werewolf story, but not your typical one. Instead of focusing on the transformation or seeing things from the were’s eyes, the story is told from the point of view of the woman that loves him. It doesn’t talk so much about what happens between them sexually, but instead on how they meeting each other transformed their lives. It’s well thought out and I felt like I was looking over the woman’s shoulder through the story. A change from the usual and in this case, that was very welcome. There is a real, powerful relationship between the two characters in this story and I found it a refreshing, welcome change.

Rae of Sunshine – A vampire story, but again not your typical one once again. It’s interesting to watch the mirror that exists between the woman, a human, who needs more than the vampire can give, and the vampire, who must control himself and deny her what she wants. The strife between the two characters is there, but it’s not overpowering to the point where the sexuality of the story is destroyed by it. There is, of course, an erotic scene that plays out and in that moment some of the inner thoughts of both characters come out in the open. It’s nice to have a vampire story that isn’t “perfect” and in this case, neither of the characters are that.

Incubus Made Flesh– The Incubus story of the collection. Balthazar is the Incubus of the story, and normally he exists in the dream world without physical form. He watches a woman pleasure herself and discovers himself drawn into the real world. I was hoping for more when the ending of the story came, it wasn’t what I hoped would happen based on the other two stories in the collection. The overwhelming sadness in Balthazar is palatable though out the story and the raw sexuality of the woman he watches which draws out his own needs is very erotic and well written. Again, this isn’t a “normal” Incubus story and that makes it work very well.

Well written, lovely emotions, settings, and characters. I think that the author would be well served to focus on any of these short stories and make a longer novel about them…