Speak into the Air by TeraS – Part Three

A Review of Sweet Dreams by Thalia Duiv

Some short stories about Succubi really do nothing for me. It’s either all horror or all sex. No characters to speak of, the Succubus is stereotypical, and I really just find it very hard to like stories with those things going for it. In a small number of pages you should be able to have a hook, a character to care about, and a resolution to the story. It can be done believe it or not. 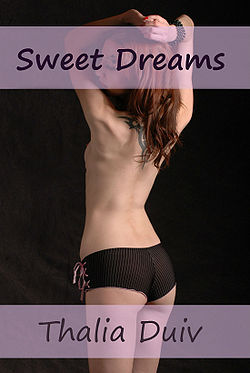 Marisa has fought hard to win her territory. She is proud to own many fine males. Tonight, she finally claims her latest conquest – a sexy young man with a big appetite.

I think that this is one of the best short stories about Succubi that I have seen in some time really. It’s smart, it’s sexy, and it has a story that isn’t a hot flash, but a tale to be told in it’s own time.

Marisa makes a delicious Succubus, she isn’t traditional and there isn’t any soul taking involved which I appreciated. I also liked that she states clearly in the beginning that Succubi like her do not kill, but feel on sexual pleasure. What’s more interesting is that in her case she does so both in the dream world and the real world which is an interesting combination.

I liked her methods, her thoughts in what she is doing and how she does it as well. There is a sense of past history when she talks which adds to the story universe in a lovely way. But she has no tail or horns, or at least they aren’t mentioned in the story, which is a little disappointing to me as it usually is. But she is sexy and she is a redhead with a very dominant personality.

Reminds me of someone…

It was interesting as well to see her describe her prey in the story. The man she seduces and feeds from, we never learn his name. I think that shows her mindset, that those she has “claimed” are simply the means to an end for the most part. However there is also the slightest hint that she actually cares about this new addition to her… well, I’ll call them pets.

That’s not a bad thing, I rather liked that she had a range of emotions and we saw those a lot in the story. If she was cold and uncaring I wouldn’t have enjoyed this work as much as I did.

Even though it is a short story, it has been edited, checked, and most of all, made into something that holds you in the story rather than making you want to skim and get to the climax… or in this case, climaxes.

Too short. Much too short by far. And the author left a door open to a follow up story that I would like to see happen as well. Marisa is interesting, and I would like to know more about her than the small hints and teases that appear here.

A nice read, and it’s a free story at the time this review was written, so you really should go and get it…