I do understand that sometimes authors will release a novel or book under a different name, or create a different cover for their works. I don’t really have a problem with it to be honest if they take the time to make the story better in some way. In doing so that to me at least gives some hope for some improvement… Most of the time at least. 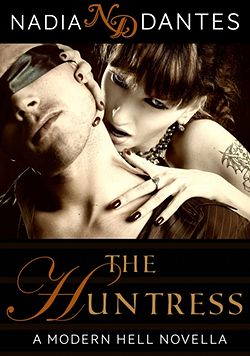 The story is summarized as:

The huntress’ lust can only be satiated with blood and sex, so she stalks the night, looking for prey. However, few men prove dark enough for her tastes. But tonight she was lucky – she found a predator as warped as she is. Unfortunately for him she’s anything but human, and he’s carrying information that could tip the scales on the war brewing between Heaven and Hell.

The clock is ticking…

I had a really bad case of deja vu when I read this story. It seemed really familiar for some reason that I couldn’t quite put my finger on. At least until I did some checking and discovered that, in fact, I had read this work before under a different author’s name. Moreover, I have even reviewed that story here on the Tale in February 2012.

Instead of just closing the book and moving on, I decided to read this work to see if the author had changed anything besides the cover and their name. I had hopes that there might be more to the story, more to understand about the characters as well.

Most of all, I was hoping that the amount of blood and horror would be reduced to something a bit less overwhelming for the story as a whole. For those that didn’t go to see how I rated this story originally, I gave it two pitchforks out of five for a lot of the reasons I have listed here.

So, with all of that in mind, I read this version of the story with the smallest hope that there would be something, anything, that would redeem the original story even a little bit, or, at least the author would fix the spelling and grammar errors that caught me before.

I can’t say that happened.

I really didn’t notice anything changed, nothing new, nothing that made the story anything more than it was the first time it appeared.

Now I will say that the original story is no longer listed on Amazon, so for readers there it will be something new. As well, the story appears on Smashwords in its new form as well, thus for a new reader it is a new work.

So, looking at this work as a new one, I can only repeat what I said about it originally…

The main character of this story, Dena Bat Mahlat, is a succubus. She has a demonic form and a more human one that we see in the work. She is violent, arrogant, evil, and all of the other things that succubi, at least the classical ones, are seen to be. She kills those that she is with, in the most violent manner possible, and attached to that is a need to control men around her and debase them…

All of which makes her as a character someone that I honestly don’t like, don’t care for, and wouldn’t be sorry never to see again.

There is a story that isn’t touched on and I would have liked to be able to see the connections that have to be there, but aren’t explained. The ending leaves many questions and an open door to the next work in the series. I’m not sure that I want to read that when it appears. If all that appears there is more violence and no story, then I’ll be as disappointed in that work as I am in this one.

I’ll give it two pitchforks out of five.

There is a succubus, but a succubus should be more than a monster and violent.

Almost word for word what I wrote before, but then it is that isn’t it?