Succubi Image of the Week 254

A Review of Lust by Douglas Vance Castagna

There are, at least for me, not many novels written about Lilith that I like. Most of that has to do with the character of Lilith not being really true. Sometimes it is her appearance, mostly it is her mannerisms and actions most of all, but, more often than not… it is how she is opposed that doesn’t  seem right. Or the aftermath that seems… inconsistent. I found a work recently that does create a moment in time, a Lilith that makes sense, and events that do connect to each other. All of the hallmarks of a good, well designed story… The only problem is that I would like a smidgen more… 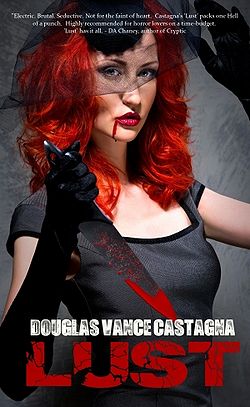 The book summary tells of:

Before Eve, there was Lilith…

Adam’s first wife was not created from his rib but from the muck and mire of the earth. She soon wore out her welcome when she refused to allow herself to be subjugated by any one or anything. After leaving the Garden she gave birth to both the Incubus and Succubus.

Before art, there is inspiration…

Whispering into the ears of artists throughout the ages have been the Muses. Their benevolent guidance has helped their beneficiaries create some of the most enduring pieces of art in the world. For one artist though, his Muse is something far worse. She is guiding him to create a portrait of herself in perfect effigy. When the painting is complete, she will live again. The artist and mankind may not be so lucky this time.

Before the rise, there must be the fall…

Lillith is back and wants it all this time She is not happy with merely being reborn. She wants total control and has a problem with being bound to anyone or anything. She is the total embodiment of physical perfection and wanton sexuality. Men throughout the ages have killed for her and died for her. Pray she doesn’t set her sights on you.

Before Life, before love, before death, there is…

One of the things that is, honestly, difficult to find in a lot of works that I read is a story that doesn’t lead you by the nose towards its conclusion. By that I mean that you are given hints through the story that will, eventually, give you the ending before it arrives. What’s more interesting to me is when the story comes with questions and riddles that the reader needs to figure out before the climax of the story arrives.

This work provides that quite well I think. There are moments when you believe you know the reason for things happening as they are, but in truth there are veils placed between them that, if you do not pay attention to them, you will be taken in a direction in your mind that is incorrect.

In other words, you need to pay attention when you are reading this story.

She uses her charms and powers to entwine others in her web and then draw them to fates that are, in their own ways, almost poetic. But she is, once the story goes past the seduction and erotism of that entrapment, at her core a being of evil and she has a goal to which all of her actions, no matter how small, all lead to.

That brings up the appearance of the others that oppose her, and I will not spoil that part of the story save to say that who they are, what they appear to be, and how they mesh into the world are, to me at least, at times almost kind of a comic relief to the rest of the story. With all of the horrific moments that appear, they being light to the story and I appreciated that quite a lot. The thing is, I really wanted to know more about them. There are hints towards the end of the story that do, really, open a lot of doors to them, but aren’t explored and I would have liked to have seen that happen.

I will admit that in the case of a few of the characters in the story, when their ends come at the hands, figuratively speaking, of Lilith, it reminded me of several stories about her that I have read. That’s to say that their ends reflected the myths of succubi that have appeared over time, some of them harkening to a visage of succubi that makes them very evil beings physically and otherwise. It also needs to be said that, mostly, those that Lilith does send to their ends do, in their own ways, deserve their fates.

There is as well, an underlying duality in the main characters of the story, Adam and Lilith especially that is quite delicious and should be paid attention to when reading this work. As well, take careful note of all of the names in this story as they all do have connections to the legend of Lilith in one way or another.

It needs to be said that this is not a simple work of horror. There is a very good, very complex and very interesting story that underlies the moments of horror themselves. A very few authors that I have read have managed to accomplish this feat and this author managed it very well. When I can read a story and the horror isn’t the first thing that comes to mind, and there is quite a lot of it here, that ‘s an accomplishment I believe.

The author’s tone, characters, settings and descriptions of what happens in the story are excellent, some of the best that I have read really. I found the actions of Lilith, as the seductress and succubus that she is were well done and felt true to the characters throughout the story.

There is a lot that I am not saying here, mainly because doing so would spoil the work itself and I don’t like to do that. But I will say that Lilith appearing in her various guises, especially in the hospital, are perfectly written and I rather enjoyed mentally fitting together the descriptions of her into my own idea of what she looks like.

She is a succubus, of that there is no doubt in this story. But she is more than that and we see glimmers of that in her. That was something I enjoyed and it made the story speak to me…

I’ll give this work four and three quarters out of five pitchforks.

Wonderful story, the depths within the characters is amazing. I enjoyed the interaction, Lilith herself, who opposed her, and the mythos that surrounded the entire tale. The horror was mild, which made this much more enjoyable for me than it would have been if the author had simply gone out a horror story only tangent which this work isn’t.

But there is a tease at the end, which I would love to see explored very much and it wasn’t. As well, the hints about certain beings aren’t quite followed through, not that needed to happen in this work, but it would have made for some nice background story.