Succubi Image of the Week 252

A Review of the Demon Slut series by Anya Asarovna

Today I will be reviewing a pair of stories from an author, but there is a caveat. That being the series is incomplete, it appears to be abandoned, and that really bothers me. The idea is a good one, the characters are wonderful, the scenes are so very hot too… But most of all? Oh there is a Succubus and she is really one of the very few that I enjoyed that are evil in their way. I’ll review the two works in this series separately, and then I will make some comments about everything at the end… 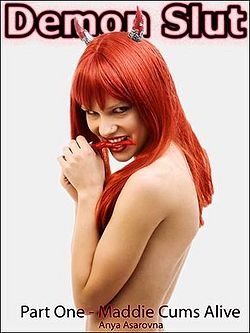 The first work tells of:

Maddie Barnes is a field agent for the Protectorate, defending mankind from things that go bump in the night. On a routine job she encounters a thing that not only goes bump, but also knows how to grind. And lick. And suck. And all manner of other unwholesome activities. It will take all of her training to overcome this evil Demon Slut.

There is a lot that I like about this story. Of course the one thing that I don’t like is that it is, really, much too short which seems to be a curse of all of the Succubus stories that I have liked of late.

It’s interesting that the story is, almost entirely, an internal monologue that Maddie shares with us. The things she sees are written from the outside looking in, which I also liked. Maddie herself has quite a lot of background for such a short story. It is however a bit light on specifics which I think would have been nice to have in the story.

She talks about her training, but that is somewhat muted. She considers the orders she is given by her superiors, but then discards them as the Succubus takes her victim and Maddie acts as a voyeur for the reader. Maddie then has to make a choice and that choice places her on a path that she never could have imagined…

Which brings us to the Succubus of the story. She isn’t given a name, but she is a redhead, she is very sexy and what’s more interesting is that the story tells a lot about the powers she has to cloud and control the minds of her pray before she takes them. It is, of course, the taking that is so very hot, so very well written and most of all, gives her personality.

In truth, she has more personality than any of the others in the story, and that’s something amazing considering that she speaks very, very little. Save for, of course, one very specific word that takes Maddie over the edge and plummets her life into something completely new and unexpected.

It should be fairly obvious what that is, and Maddie’s transformation is only starting at the end of this story.. Which leads nicely into the next book of course.

The writing is very, very good and I liked that the author seemed to care about what they were writing about enough to give the story heat, but also make it a story. That’s hard to do sometimes in an eleven page work, but the author managed it well.

But it is too short. It bothers me that there is so much heat, so much action and promise to the story and then it is suddenly over, the aftermath is only hinted at and the story ends. I do understand that the purpose of doing this is to sell the next part of the story, but, this work falls into what I call the “$2.99 stroke story” problem. It’s hot, it’s good, but to pay$2.99 for something this short? I would have been happier to pay $5 for both stories together and feel like I got something for what I paid for it.

As such, as much as I would want to give this a higher rating, I’ll give this work four pitchforks out of five…

Hot scenes, a wonderfully evil Succubus and most of all, it leaves you wanting to read more. The only thing that I would have liked more would have been to see more of the history of Maddie and the Succubus herself.

When this work appeared, it wasn’t clear if there was going to be another part, or parts in the series. To my surprise another book appeared soon afterwards which added a lot to this story… 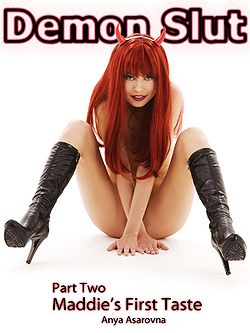 The second work continues the story:

After Maddie’s encounter with the succubus, she finds her body has changed. She’s more buxom. Curvier. But the demon might have changed her in other ways, too. She can sense people around her being naughty. And it awakens a dark need in her that must be fulfilled. And then there’s the little problem of that strange voice in her head that’s probably not her own…

The story continues with Maddie waking up at home in the aftermath of what happened. The thing is, she’s different. And the woman she sees in the mirror reminds her of someone… The Succubus.

I’m not spoiling anything to say that, yes, Maddie is becoming or has become a Succubus and the larger problem is that inside of Maddie is that Succubus… and she’s hungry. But what makes this part of the series for me is Maddie’s descent into being a Succubus and discovering what has happened to her, how she’s changed, and what powers she has.

The moments when Maddie feeds are really well done with a nicely hot mix of Succubus need and human desire. Of course the story doesn’t end well for the person Maddie feeds on, but, that then leads into a cliffhanger that promises a lot… but we never see it. It’s been three quarters of a year since these two works were released and nothing has appeared since.

That really and truly is a shame because what happens in the second work sets up what could be an amazing storyline and I would love to see that. There is conflict, there is mystery, there are so many questions to be answered and… it just comes to an abrupt end.

Which makes the length, the abrupt ending, and the lack of a third work in the series, or more for that matter… disappointing.

Again, as much as I would want to give this a higher rating, I’ll give this work four pitchforks out of five…

The hot is better, the Succubus that Maddie has become is wonderfully interesting, and from what little we see I so wanted to see more… But again, too short, it ends on a cliffhanger and that really hurts a lot.

The stories end on a cliff hanger and… that’s it. Which for me at least is a huge problem. The author has a really good story, a problem to solve, a Succubus that is still there to bother Maddie, a group that seems to be ready to do something, or was responsible for Maddie’s transformation.

All of this is wonderful for the creation of a hugely successful novel… And it just hasn’t moved since February 2012. I had hoped by this point in time the author would have continued the story, but it appears to be abandoned.

And to be honest? I can see so many places to take this series that it drives me around the bend.

So, should the author read this review… Finish the story!!!

Or send it to me, at least I’ll appreciate it for what it is… A really well done Succubus series that made me really quite happy to read…

Overall, four out of five pitchforks.

Too short, too much promise, not enough progress… But I can hope at least for more…