The Cop and the Cat Burglar by James

A Review of In Her Sleep by Laura Madison

Time for a review of a story that has an Incubus in it… Now that can be an interesting thing and quite  delicious to read too… The thing is, personally, I hate it when a story’s train of thought is zooming along and then it suddenly runs into a brick wall… Otherwise known as the end of the story…

I really don’t enjoy that when it happens… 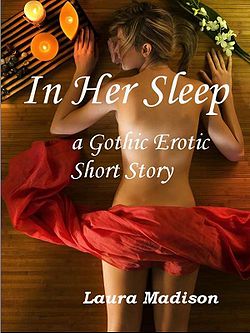 Jessica awakens from what she thinks was needed sleep after a night of heavy partying. She only vaguely remembers the dark man who spent the night with her. Until she has an explicit dream which she later discovers is more than just a dream as she finds herself under the control of a sinister power.

Jessica wakes up after a party and discovers that she might have been having more fun than she normally would want to. She dreams of a man that came to her in the night, made her scream with pleasure and then… then she’s not sure if that was a dream or it was reality…

But she will find out which one it is.

Jessica as a character is interesting, if perhaps a little vague and scattered in her thinking. I wouldn’t call her a strong character by any means. But there is the seed of an interesting person to read about… the problem is that we don’t get to see a lot of that for all of the questions she ponders, thoughts she tries to figure out, and moments that are her life.

The incubus of the story, Drake, appears for a moment, tells us very little and leaves without anything really being explained other than Jessica’s life has changed, forever, and she’s going to have to get used to it.

I have a bunch of problems with this work. Firstly the author shifts tense a lot in the story, many times mixing up their tenses which gets confusing and bothersome as it goes along. Next, the quotation marks around the words of the characters are out of order, or appear in the wrong places which is also a bit jarring. The dialogue seems wrong when you read it out loud. For example: “Fuck, I should be asleep still.” or “Don’t dare mock me bitch, it wouldnt be wise.” It seems stilted and almost mechanical really. It doesn’t flow smoothly and just feels odd reading the dialogue out loud.

It needs an edit. A huge one honestly. There are so many errors that one good editing pass would have fixed and made this story so much better than what appears here.

My biggest problem is that there is a build up to the reveal about what’s happened to Jessica, we get to the edge of that… and the story… stops. Just a promise that there is more to tell, but we never get to see that. We see nothing of what Jessica becomes, other than a vague hint, and otherwise it’s something like a one night stand. There’s a lot more to tell I think, but whether the author found they didn’t have a place to go with it, or just decided it was enough, I can’t say…

I’ll give this work one and a half out of five pitchforks.

It has promise, it really does, but the mistakes and errors get in the way of it…