Succubi Image of the Week 249 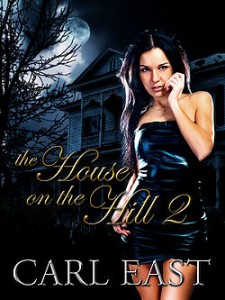 The House on the Hill 2 by Carl East

On Sunday I reviewed the story The House on the Hill by Carl East. When it first came out, it looked as if the story would end there, which really bothered me a lot. However, the author did write a second part to the story, which I will be reviewing as well today on the Tale. The thing of it is… I really think the author would have been better served to make the two parts a single story… Perhaps that will happen, but I expect not…

The Succubus, Serena, is stuck in limbo and when she is freed, she is more than appreciative. In fact, she’s so thankful she’s willing to show her rescuers a few of the hidden talents that the Succubae possess. By the time she’s finished showing off her abilities the new owners are going to wish that she would stay.

Earlier this week I review House on the Hill and this work is the second half of the overall story I believe. Serena the Succubus returns, the attempt to release her from her curse didn’t work and once more the owners of the house discover the fun and games that having a Succubus can bring.

It’s a much better overall story than the first book was. It isn’t really just about the erotica, which is a welcome change from the first work. There is more about the powers of a Succubus, what she and do, what the experience is, and what that transforms the relationship of the main characters of the story. It becomes a story of learning about secal experiences, what they bring to relationahips, and how, if you take the chance to explore sexually who you are, you discover things about yourself and the one you love that you never would have expected.

I felt the expanded background of Serena added a lot that was missing from her personality in the first work. There are also moments of her using her powers which I thought were intersting use of the Succubus legends towards what they are capable of.

Regrettably, this work seems to close Serena’s story. However, I had thought the first work did so and then this story appeared. So while there is a finality to the ending, there is always the possibility of her returning in another story or, and I think this is more likely, she appearing to other characters in other places.

Serena becomes more of a Succubus that I like in this work. She is more sensual, but also most thoughtful and more caring. Still, she needs a little more personality, and a pair of horns and a tail for my personal tastes. Nonetheless, a vast improvement from the first time she appeared.

It’s a bit of a shame that the two works were not released as a single larger story. While it would make the entire work only 20 pages or so, that is a good core of a longer, more involved tale I think. And I would like to see that. I can see a novel about Serena, from her being trapped in the house by the wizard, which we never see, through her relationship centuries later with the couple that free her, to, what I would hope would be something greater for her.

I can hope at least.

Much better written and I would ask the author to go back and reedit or rewrite the first story to make it as good as the second is.