A Review of The House on the Hill by Carl East

Hot flash stories are not a bad thing. Many of them are my personal favourites about Succubi for various reasons… But the thing is, sometimes putting too much into the setting, the place, or the time to set up the story takes so much away from actually reading the work that it suffers… In a longer story that’s not a problem, but a short one? You kind of have to get away from the “tell” and give the reader more “show.” 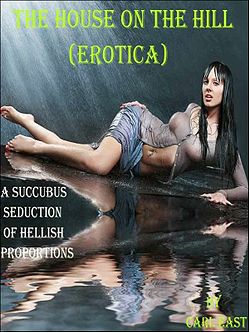 After discovering that the house they want to buy is supposed to be haunted, Sandy and Mike decide to take it anyway. It’s just too good a deal to pass up. However, when they move in, they discover that the house does indeed have another tenant it’s just not a ghost.

Sandy and Mike are a young couple looking for their first house. They eventually find out a little bit out of town that has a lot going for it, but, just before they agree to buy it, the find out the truth…

Oh course being modern people, they don’t believe in ghosts and move in. Everything is fine until a naked woman appears out of thin air and… well.. Let’s say that the couple is taken by her and they find their sexual horizons broadened… a lot.

They eventually find out that the woman is one of the Succubae, and she is trapped there, and the couple with their new found Succubae bas to figure out what to do from that point on…

I liked the story for the most part really… I thought that all three characters, Mike, Sandy and Serena, who is the Succubus of the story, were really well fleshed out, had a history and seemed very real as a result.

I enjoyed Serena using her powers on the couple, and the mind control that seemed to be part of that was really well done and I enjoyed it. The sex was hot, lots of heat to be seen and nicely described I thought as well.

My problem comes from the beginning of the story. I don’t quite understand why the author had to write so much about the house. We learn about the kitchen, the hallways, and so on, but all of that really isn’t important to the overall story I thought.

It also make the beginning of the story very tedious to read through… it sort of felt like I was reading a home improvement magazine and that just sat wrong with me.

One that was past however and Serena made her appearance, things changed for me. I become very interested in the story, about what Serena was doing and what her effects over Mike and Sandy.

The conclusion went in a way that I didn’t expect really, but did make me smile and wonder what really happened at the climax of the story. I have my own thoughts on that, but talking about it would spoil so much of the story that I won’t.

The author writes well, there was really nothing that took me out of the story, which I was thankful for because when the hotter scenes appear, that could have happened easily enough.

Overall the story is a bit short, I could have used more time in the resolution of the story instead of the sort of summary that appeared. I think that reducing the descriptions of the house a bit and adding more to the “solve the problem” parts of the story would have been  a good idea.

There is an open door at the end of the story that could make this a series of stories. If that happened, I would be interested to see if Mike or Sandy were changed in more ways than we obviously see in this story.

The author continued this story in a second work that I will review on Friday… There is a lot left unsaid and since the introduction and setting they have already done, then I hope they devoted more time to story…

Too much set up for a hot flash hurts this story a lot, but the hot sex scenes and the appearance of mind control in it really makes a difference…