Succubi Image of the Week 248

A Review of Demon Bred by Nicole Draylock

A rather short story this time about a woman seeking a measure of revenge who summons an Incubus… The problem is, the price she pays for that revenge means she loses something she can never have again… but does she really want to is the question. 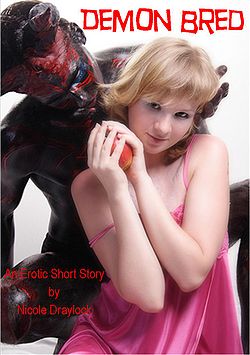 Shelley is persecuted for being different all through school. Friendless and alone she moves to the city and finds a new life that makes her happy until her old nemesis finds her and threatens to pick up the harrassment yet again.

Seeking help from an arcane text, the inexperienced occultist summons an incubus, who will be happy to fix her little problem, for a price.

The event that turns her life to a hellish experience is so minor, checking out a single book from a library, that it feels petty and I think that was the point. For what happens later to those that cause so much pain to her and what they represent, it is, regrettably not uncommon in this day and age.

The turning point is when Shelley moves away, starts a new life and then her attackers return. She is physically attacked, it is violent and brutal, and in light of that, Shelley then finds the means to summon an Incubus to have a measure of revenge.

The thing is, and this is where I had to pause, the Incubus tells her that he will claim from her something that she doesn’t see as being important to her. Eventually, after the Incubus has his way with her, revenge is found, the thing lost is discovered to have value, and the story comes to an abrupt ending.

This is where I have some issues. The concept of the story is a good one, the character of Shelley has much going for her… But there isn’t really much that happens after the Incubus appears save a summary of the aftermath. It feels very rushed to me, as if the author had much to tell in the lead up to the erotica, but then just quickly ended the story.

The erotica is mildly hot, it runs for three pages of the work, a full third of it. The Incubus is in control of what happens, Shelley is at his mercy and is drawn into acts that she had never thought of before. And the need that accompanies that brings what happens by the end of the story to her into focus even if Shelley doesn’t understand what it meant at the time.

I think that the length of this story could be easily doubled with more about the Incubus, or what he does, or Shelley’s actions after they have their moment together and so on. There are things to be told, but they aren’t.

There is a lot of meat in the author’s writing, I wasn’t taken from the story by anything in particular save for a desire to have more story… It’s a shame really.

A sort of hot flash that is surrounded by intolerance, violence and a story that really isn’t told for the sake of getting to the erotica itself. There is a story here, it just doesn’t seem to want to come out to play all that much… Be careful what you wish for and agree to… The devil is, as always, in the details…