Succubi Image of the Week 247

A Review of Succubus Turnabout by Patricia Kirby

I do wonder what it is that makes someone publish their works under several different names. Now while I cannot be absolutely sure of this in the case of the book I will be reviewing on the Tale today, it strikes me that this book and the one I reviewed last week have several thing in common. Possibly the most striking of these being that this book, like the previous one, is billed as “specifically written for women only.” Setting that aside, the larger question is, if it is the same author, did they learn anything from the previous book and applied it to this one? Is the story something better? That’s kind of a toss up… And then something else appears that just turns me off the story completely. 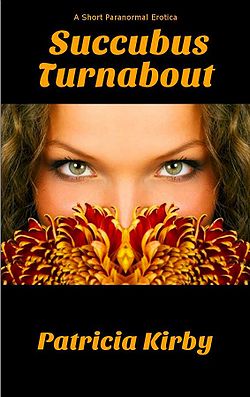 The book summary tells of:

Layla had practiced her art for millennia, and she had no peers even among her sister Succubi. Her most recent protégé, Ariel, was a tiny, delicate jewel of a creature who had a very promising future, and Layla was justifiably proud of her. What Layla didn’t know about was Ariel’s ability to produce a miracle for her, an experience unlike any she had experienced in her long life…a mortal who could turn the tables on one of the world’s most experienced Succubi.

Again in this work I have a couple of problems with one of the characters. Ariel is much too young. While in the lifespan of a succubus in this universe she is mentally supposedly in her fifties, that isn’t her physical appearance.

She’s much younger. As is the wrong side of eighteen younger. This is a point that is mentioned and reflected upon in the story, which doesn’t help. One passage has her “skipping” as she hunts for her next victim and that just sets a vision in the reader’s mind that regardless of anything else, she is too young for the sexuality in this story. What is more disturbing to me is that there is no reason that she must be physically so young. Why do this? What is the point of having a character like this?

According to the short amount of history about succubi and incubi that is given, there are several things that overall are familiar. The concepts of succubi feeding once a month, taking their feeds to incubi and then the incubi using that to try to create more of their kind has appeared before. Long lifetimes as well isn’t new. I will note that there are no signs of horns or tails on the succubi in this story, nor are they mentioned. There is some mention made of the classical core story of the succubi, that there are only six true ones and all of the others are Lilin, again, a core story and legend as well.

If you can get past the concept that Ariel actually isn’t as young as she appears, if you can ignore the repeated references to that point, then there is a story to be read… Sort of. The beginning is just a long scene of Ariel and her teacher Layla together, through that there are moments which are thought provoking I will admit, but overall, again, I couldn’t get past Ariel’s age. When Ariel returns with prey, there is a threesome and, surprisingly to me at least, Layla discovers something she didn’t know about herself before Ariel leaves to find more prey for the two of them.

In short, that’s the entire story.

So the question is, why is Ariel so young? Does it make or break the story if she is older? In truth, we didn’t need to know how young she is, and if she was eighteen or twenty then the rest of the story would have been fine. Perhaps a rewrite is needed to make this not an issue and actually allow the reader to get to the story itself.

I mentioned earlier that the work is promoted as “specifically written for women only.” No. Just no. There isn’t anything in this story that I felt gave this work that label whatsoever. Ariel’s character I think would not be acceptable to others as she was to me. I don’t understand what the point of this label being placed on this work is save to try to draw women to it. That’s a shame and probably slightly false as well.

The story really has moments that I didn’t think much of. The writing is good, but the problem is having a character, a very sexually active one, being just that side of eighteen makes the rest of the story meaningless for me. There was no good reason for this and that bothers me most of all…