Succubi Image of the Week 246

A Review of Succubus Story by Althea Jeffery 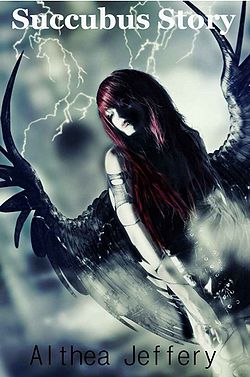 The one thing about hot flashes is their almost complete and total lack of background to the characters in the story. Occasionally there is a hint of one, or if the reader is lucky, there is a history with some meat on the bones. That to me is a good start to a story, however, having background is not as important as editing one’s work at a minimum. It is also a really good idea to add a summary to your book so that readers have half a clue about what you are writing about. Guessing is not the way to promote a book I am sorry to say.

There is no official summary of this work, so the following is my personal take on it:

Elissa is on the prowl once again. Never following the rules of her kind, she feeds on the desires of those around her as she always has to survive.

This night, she goes to a bar and meets a woman to feed on, all the better for her as she prefers women after all. The problem is, this woman may well be the end of her once they leave the bar…

Arrogance can be fatal and Elissa is no exception to that rule.

There are a few things I have some problems with in this work. First and foremost is that there is no book summary whatsoever. Yes, there is an excerpt, but it tells you almost nothing about the story. It also is noted in the information on Amazon that this book “is specifically written for women only.” I have a lot of problems with that statement.

Is it written for women because the main character is one? It is because the author is a woman? Is it because there are lesbian scenes dominating the story? None of those in particular at least to me makes this work anything like being “specifically written for women.” It feels like an attempt to hook people into buying this work and that bothers me a lot. If you want someone to buy a story from you that you are selling for $3, why don’t you give at least a half-hearted attempt at a summary so that a reader has the slightly clue what the work is about?

I have to say that while Elissa is a succubus in both actions and the powers she has, there isn’t all that much that makes her stand out as one. She might as well be a witch with spells to increase the libedo of others for what we see of her. I won’t spoil the ending, but, when that arrives at least there is a small explanation of her universe and that of her kind. In that short few paragraphs the story turns from sex scene after sex scene towards an actually interesting story.

But then the story ends, and save for a single comment at the end, much is left unresolved. Now should the author be thinking about a second story in this universe, I would suggest that they please get an editor to fix their grammar and tense structure… and write a book summary please?

Getting back to Elissa, she’s… well, bland to be honest. She is the stereotypical succubus who cares about sex, feeding, and very little else to ignoring clear signs that what she is doing is a mistake. Pride goes before a fall and in this story Elissa falls on her face… repeatedly.

I found the sex scenes to be mildly hot for the most part, and the emotional aspect of them wasn’t really there. It all felt like a game to me and that is something I don’t particularly like in a story. I like to see characters that aren’t paper doing things that aren’t simply rote.

Too many editing problems that pulled me time after time out of the story. For what the author was asking for this short story price wise, I expected so much more and I didn’t get that.

There is a story, it tries to appear, but it gets lost in the sex scenes for the most part. It needs at least one decent editing pass too. The ending took so much away from all else that the story offered and I don’t see why it had to turn in the direction it did. Write more, make the story longer and somewhat less fragmented and that would help as well.