A Review of The Demon of Renaissance Drive by Elizabeth Reuter

A Review of Air Bunnies by Stephanie Beck 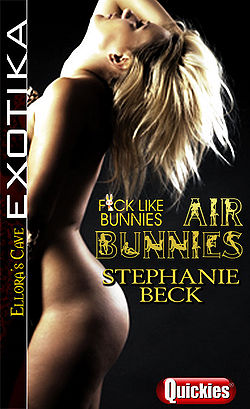 It is described as:

Jake’s missed fight might cost him his job. Desperate to get to Malaysia, he follows a fellow traveler’s advice and gets a seat on Double Ear Air. An airline bent on sexy customer service, where the flight attendants offer much more than peanuts and stale pretzels—and don’t adhere to those pesky rules against the mile high club and giving head in the aisles.

This is the second book in the Fuck Like Bunnies series by this author, the first being Bunny Club which I also purchased so that I would get an idea of what this universe was set up to be and how it worked.

I suppose the best way to describe this series is lots of sex followed by the death of any humans that appear in the stories. It is violent, somewhat disturbing, and isn’t what I would call something you read for a good time honestly.

The horror aspects of the series are very strongly written with lots of descriptions of body parts and things done to them. The sex is hot, but it can’t overcome the ick factor in the stories themselves.

Which brings me to this work in particular.

The Succubi, or rather Succubae, are evil bloody creatures that are shown only in their most horrific aspect. And there is a lot of that shown in the story. It’s a major turnoff for me and I didn’t care for it at all, redheads or not.

The reason for them being there makes some sense in this universe, and, yes I can understand the reason for them and what they do, but honestly it was probably the most disturbing description of Succubi that I have ever read.

I’ll give both works one pitchfork out of five.

Nothing like I expected, nothing that I honestly liked and that’s a shame.