Yet another Succubus case of art…

A Review of Air Bunnies by Stephanie Beck

A Review of The Demon of Renaissance Drive by Elizabeth Reuter

Sometimes I discover a story that is special. In the characters, the events, the moments that pass in the telling of the tale. It’s wonderful when that story takes a Succubus from being a pale lifeless thing and makes her a wonderful person that you come to care about. And if in that story telling there is also a richness of voice as well? That is something very special to me… 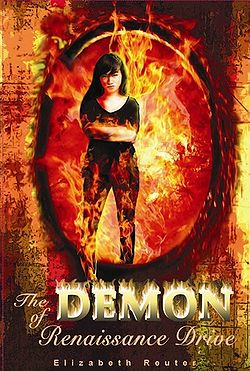 The Demon of Renaissance Drive by Elizabeth Reuter

For one of Hell’s preeminent succubi, life should be sweet…and it is, if you like sulfuric air, political minefields, and crashing boredom. After six thousand years the succubus Annabelle finds relief from her dull life in the companionship of a damned soul named Harry, until the Kings of Hell decide they disapprove of Annabelle and Harry’s bond.

Unfortunately, even escaping to Earth isn’t enough to keep the pair safe. Somewhere between dodging a dangerously inquisitive psychologist and fighting Satanists out for Harry’s life, Annabelle realizes running is no longer an option. She must return home and make a stand.

Whether she survives or not, at least she isn’t bored anymore…

Annabelle, the succubus if the story, dramatically changes from the beginning to the end. At first I really didn’t think much of her, she was too self absorbed, lost, and, to be honest, I found her to be not all that much a succubus as a spoiled woman complaining about the world around her. But through the passage of time, she became so much better as a character, as a succubus that I wanted to read about, but most of all, who she became was someone that I wanted to see succeed.

It’s very hard to talk about this work without giving away so much of the story, but, the work is captivating, the characters are so much more than they first appear to be, and that made this a work that I couldn’t put down.

Annabelle faces the politics of hell, and for Succubi, the politics of hell are more than a headache. They are really quite deep and I have to say that how Succubi are seen there really was one of the more apt and true displays that I have read in some time. I think the most telling thing is when Annabelle simply says “I am a mother.” And in that moment I think her personality, her existence, and her own being became focused.

One other thing about the Succubi as a whole that was mentioned was that, in general, they seem to have an Asian aspect to their true forms which I think was an interesting reflection that I haven’t seen before in a story about them. I will reveal one other thing however, and that is they do not have horns or tails as I like them to have. But, and this is what makes them almost perfect, they are intelligent beings who might seem to be simply, as those in hell keep reminding Annabelle, whores and sluts, but in truth their power is respected and desired by many.

One point in the story that was sad was when it was revealed that there are a very few Succubi in existence in hell and, more so, that they are the only means by which new life can come to be. It is a trap for the Succubi in this story, and how they are used, misused, or manipulated seems very tragic as the story is told.

There are other Succubi of course, we only really see one other named Samantha. I really didn’t care for her very much. Much too flippant and self absorbed…. Very much what Annabelle was at the beginning of the story.

The one character in the story that we don’t see much of, and that did bother me as I wanted to know more about her, was Lilith. She really interested me in her role, her power, and her appearance. I wanted to see her as the mother she is to all in this story, but her appearance is short, but powerful and left me wanting more.

A final point about the Succubi in this work, interestingly to me, they have multiple forms. That in itself isn’t new, but there is a new aspect to that. Their forms, all of them, when many people see what they each see as their own perfect woman, actually physically exist in the same moment and place in time. That’s a concept that I would have liked to explore some more.

There are quite a few characters in this story that oppose Annabelle and her goals. They are all very strong in their own rights. But it is how Annabelle overcomes, controls, diverts, or otherwise turns them onto other thing that is fascinating to watch. It isn’t simply that she is sexy to do so, she is that of course, but it is how she knows their weaknesses, plays to them, and in the end manages to turn the tides that push against her.

The other two main characters, Harry and Jimmy, develop in ways that I didn’t expect when they first appeared. Again, it is very hard not to spoil the story when talking about them both. Harry’s transformation I didn’t expect, his secrets were ones that we shocking and how those secrets change his relationship with Jimmy are striking.

When the story came to its end, I was shattered to be truthful. It ends on a cliffhanger that leaves so much open, so many concerns about Annabelle, Harry and Jimmy that need answering. I want book two. Right now please?

The author writes with a flair for story, a shaping of her characters, and makes you care about each and every word on the page. That’s something rare to find for me in a Succubus story and it made the experience of this work wonderful for me personally.

A book well worth your time with a Succubus that is so much more than she seems to be.