A Review of Dark Revelation by Stephanie Myers

A Review of Not Quite Casper, Empusa and The Power That Dreams Have by Mercy Loomis

A Review of Eagle’s Shadow by Niall Teasdale 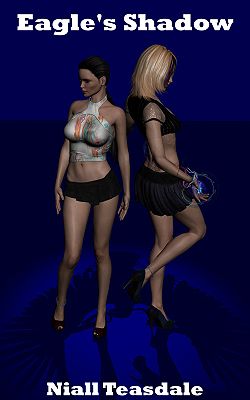 This, the ninth book in the series, puts our heroines in a spot:

Ceridwyn Brent and Lily Carpenter are on top of the world as they attend the New Year Ball at the Chinese Embassy. Attending are the Prime Minister of Britain, the President of the United States, and Huanglong, the Chinese Imperial Dragon. It seems as though they have really entered into prestigious circles when Ceri and her boss, Cheryl Tennant, are then invited to a function at the US embassy.

Then Ceri is accused of attempting to assassinate President Wilson, and Ceri and Lily fiend themselves hip-deep in a plot designed to bring America to a state of war. With an old enemy emerging from the shadows, the American government hunting them, and very few friends to help, they must find a way to stop the plot and get out of it alive.

Ceri and Lily fall into the world of political games, both simple and complex in this story. It was interesting to see how America, and Canada for that matter are different in this world than ours. It was strange to see places familiar and yet so very different. But most of all was how Niall took events from the real world and merged them into his story, specially subjects like espionage, rendition, and international affairs.

The most interesting thing for me however was, the transformation of Ceri from the beginning to the end. It’s reflective I think of how her views of herself are changing, but also a kind of realization of how she must take a different view of her own life and the lives of those that she calls her family now. Ceri suffers… suffers a lot really in this story at the hands of people who, truly, have no idea of honour or understanding. While a lot of that is caused by forces that are out of their control, what Ceri must do by the end of the story in order to set things right was… severe.

That choice has repercussions of course, quite a number of them. The final pages of the story did make me pause and consider where Ceri will go from this point forwards. She has made enemies of course, that is so very present in this story, but she also has made some allies that I think will return in the future one way or the other.

The world Ceri lives in is, time-wise, the same as the one we live in, but while that is true, so much of the technology that we take for granted doesn’t exist in her world. Possibly the most thrilling to me at least is the appearance of airships as one of the means of travelling. And the scenes there in were, really, well done and painted a lovely picture.

Ceri does face a threat that she has seen before, and the true scope of that threat when it is fully realized is quite overwhelming really.  But in spite of that threat, the crisis and all that happens to Ceri and Lily in the story, it is still about the people. What one person, or a few people, can do to counter a threat to peace is really well told.

Lily, I am quite happy to say, my favourite half-Succubus, is very present in this story, and more so, she is a very strong character. She shows herself to be more, so much more, than what problems she faces expect her to be. What’s more, she reveals herself to be as strong as Ceri is when events take the two of them into situations and problems that try to tear them apart.

I do have to say that the American characters in the story seem to be very much “out of the loop” so far as the realities of magic and the world in general. I wondered if any of the major American characters, save one, had a clue about the things they were playing with. The reasons behind that, the manipulations and the deceits therein, were more than I expected at the beginning and that did add to the story as a whole.

There are some reveals that I didn’t expect which made some of the more prominent characters in the series so far have layers and secrets revealed that were very interesting and I do wonder where that will take them in the future.

As with all of the books in this series, it is well written, well told, with characters to care about, villains to despise, tales of magic to be told and more. A lovely enjoyable read and well worth your time.

I can wait, I think patiently, for the next book in the series, Ancient to appear at the end of August 2012… But it’s not going to be easy on me or my page-turning tail…