A Review of Co-Workers With Benefits by Sullivan Hart

Earlier this year, I reviewed several works in a series called The Succubus Shorts here on the Tale. You can find those reviews here and here and here as well for those interested in the previous stories in the series. There are two more works in the series that I haven’t reviewed as yet, and so this week and next I will be reviewing those works as well… 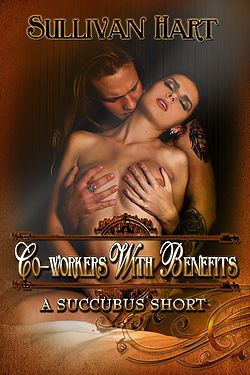 Co-Workers With Benefits by Sullivan Hart

The demons from The Fifth Collection reappear to take on their most difficult client ever. Asher-Khan, the demon formerly known as Bob, has come across a woman who will not allow him in her bed. And a visit to Lilith’s dungeon for punishment is most convincing. He must succeed on his second try.

Jazz, raven haired succubus, has never failed. And she is prepared to give her all to help Asher-Khan to complete his mission.

They fly into the night and into her room ready to convince one human that two demons are better than one.

The last book in the series I reviewed, The Fifth Collection, I asked the question if the author, at some point, would show us something of the world that the Succubi and Incubi they write about exist in.

And in this story, we really do get a good look at that world. Oh, it’s not as much as I would have liked, but I have to say that the appearance of Lilith was more than I expected. She’s not the typical Lilith in her looks or actions, her office isn’t all doom and gloom either. But how Bob reacts to her, what she does to him, and then the result of that, really were well done and I enjoyed that part of the story very much…

Having Jazz and Bob, and I will always think of him as Bob, together with the focus of their attentions was deliciously sexy, but I confused as to why Bob wouldn’t have figured out why he couldn’t get anywhere with the woman he was trying to seduce at the beginning of the story. It seemed to me to be obvious why it wasn’t working long before Jazz revealed the reason why he couldn’t possibly seduce her on his own. It made Bob a bit less than he was when he first appeared in the series and that was disappointing to a point.

Jazz seemed to grow as a character in this work compared to the others she had appeared in to this point in the series. She was a bit more dominant in her personality, at least towards Bob, and she seemed to have more of a personality that just “being a Succubus” which I appreciate.

Still, the story was shorter than I would have liked. I really liked the taste of Lilith’s office and what happened there, but I think there is still a lot more to tell about her and the world that she controls… At least I would be interested to see that…