Canada Day in the Realm…

A Review of Succubus Unleashed by B. R. Kingsolver

Earlier this year I reviewed the first book in a new series called The Succubus Gift. You can find that review here on the Tale. To my joy this past week, the second book in the series by BR Kingsolver was released. Called Succubus Unleashed, it continues the story of Brenna and her travels in her new life, her discovery that she is a Succubus, and where that knowledge takes her. 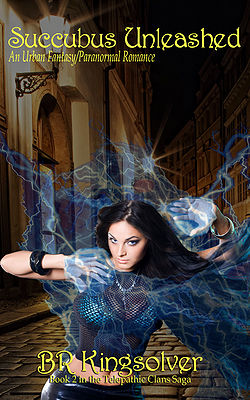 Succubus Unleashed by B. R. Kingsolver

This, Book Two in the series tells of:

It’s not easy being a succubus.

Brenna O’Donnell and Rebecca Healy continue their integration into the Clan. Learning more about their Gifts and always seeking someone who will love them. After a crash course in learning about her genetic heritage, Brenna O’Donnell has discovered what it really means to be a succubus and has learned to embrace her strange Gift. Her major concern is whether Collin will accept her for what she is. As she adjusts to telepathic society, others in the Clan have plans that will strip the last of her freedom.

The social season is around the corner, including events that Brenna never imagined in her wildest dreams. The succubi, representatives of the Goddess on earth, are at the center of an ancient worship. And if a girl is going to be the center of attention, then obviously she needs a new dress.

Between the romance and glistening balls of the Clan’s social events, Brenna and Rebecca discover life is not secure. Telepaths from other Clans are kidnapping young girls and selling them into slavery.

This, the second part of the series is set six months in time after the events of the first book and things have changed. The most interesting of these changes is to the heroine of the series Brenna herself. She isn’t quite the same person she was in the first book really. Before sex was something she didn’t want to think about, have, or be involved in for what happened when she was with someone. Now it has become the core of her life really. She has accepted that she is a Succubus, what she can do, and what that means. But there is a little touch of superiority in her makeup now and, occasionally, that seems to be wrong for the person we met in the first book.

Brenna becomes a bit too focused on clothes and trinkets in this story at the beginning, but things do change and she returns to being more like the person she was in the first book, whom I adore… I chalk up the initial change in who she is to her discovering her inheritance and what that entails more than anything else and considering what that is, it makes some sense in the context of the story. Still, Brenna is the focus of the story, and as such her thoughts and emotions do drive everything, and everyone, around her.

The history of the clans is explored to a great extent in this story, but it isn’t given as a speech or lecture to the reader. It’s a living history through the families that Brenna meets which makes it a much better and interesting read. It is a complicated one, and that I expected, but wow… It is smarting to behold as it develops throughout the story here.

What I felt was the most fascinating moment in this story was Brenna’s learning about the past role of Succubi. The images of that moment, of that past, of what Succubi were in that time and what they are within the world Brenna now lives in really has stuck with me. I would love, if possible, to learn more about that past time and what the Succubi of that time were capable of… and the Goddess that they represent and that Goddess’ beliefs and religion that she bestowed upon her kin.

One question that started in the first book was why exactly Succubi were being targeted by others. We got a partial answer in the first book and the other shoe drops in this book. The resolution of this story was satisfying really, but there are still questions unanswered which need to be answered. It was good to see Brenna and her Succubi friends working together and coming together against this threat to Succubi and Brenna’s family. But, to me, if felt like the final resolution of this threat in the series hasn’t happened. There is something missing in the telling and that I think is very telling.

Speaking of Succubi, I was so very pleased to see more of them appear in this story. The different views they have, but the connections between them are wonderfully done and added much to my enjoyment of this story. It’s important to me that Succubi have families, loves, real ones, and a future. In this story that is very apparent.

What’s more interesting is that the role of the Succubi, how others see them, is a core part of this work as well. It’s a given that some would see them to be sex and nothing more, which is, honestly, a shame in the context these people appear. But the revelation of what their role is within the mythos, tradition, and celebrations of the clans… that was something wonderfully revealed.

Christmas looks like fun and any party with five Succubi in it is… interesting to put it mildly… And while it is fun, and sexy of course, it does reveal where Brenna’s family is, at least mentally, with respect to the world they live in.

This point brings about the core plot of the story and that’s Brenna’s place in her world. It’s not an easy thing for her to deal with, the demands that are being piled upon her, but it is telling that while some of her family is uncouth, ill advised, and just a little jealous in a lot of ways, there are personalities behind them and they aren’t simply cardboard cutouts used to push the story along.

Then you contrast that with those that know her, what she does for them, and she does quite a lot when she realizes a few facts about herself and who she is in this world. The story is one about relationships, but if someone hasn’t one with Brenna, then things are… difficult.

Getting to the relationships, I liked how Brenna and Rebecca continue to grow in their relationship. The secrets revealed about Rebecca, but also one major one about Succubi that changes all of their lives was magnificently done and it made me cry each time another Succubus was taught the gift.

Love is, after all, something that all beings should have. And it’s good to see that gift being given freely. I will admit though that the method of passing it on made me laugh when it first happened and just giggling each time it happened again.

I think that this gift changes a lot of things in this series for a lot, and I mean a lot of characters, Succubi or not. But then there is the question of those that are called Halfs in this world. As much as the gift for the Succubi is wonderful, the need for them remains and it does cause some strife between characters that, honestly, should know better about themselves and the ones they care about.

Brenna’s life with her love Collin… I would call him Brenna’s Eternal really, and for those that know the mythos that I am referred to… He is most definitely one. I found that his relationship with Brenna, and how they match was just beautiful and it brings so much hope to them and the series as a whole.

I do feel that, however, Brenna has changed, and I’m not quite sure I like how she’s changed. Let me be clear that I love her, a bunch, but there are moments when she does something and I have to stop reading and think to myself, no, I don’t quite see why she would say something like that, or do something like that. What possible point is there to her mentioning a topic that has nothing to do with what’s going on right that minute? But then you have to remember that she is, to a point, able to see into the future and then the questions really start coming… Or what she does leads to a point in the story that you didn’t expect and it makes a bit more sense then.

Overall, it is a story that is well told and well written, a nice companion piece to the first book in this series and I expect that many of the questions that are bugging me at the end of this story will be addressed in the next part of the series when it appears…

Another five out of five pitchforks but with one wish for the next book when it appears. Mebby a little less family politics please, and a lot more about the Goddess that all Succubi serve?

Wonderful story, lovely characters, and the Succubi are what I think of as the best kind of Succubi. They bring love, joy and passions to those that believe.

The next book in the series, Trust In Succubus will be released later in 2012 and I, and my page turning tail await that day anxiously…