A Review of Incubus by Ladydelight

I am very, very lucky as a writer of the occasional story, that I have an editor who takes my mess of words and makes them look far better than they are. I thank him every day for his kindness in doing so for without him, I could not write anything worth reading. I wish that other writers, and there are a lot of them, would find someone that would look at their words and make them better. Because honestly there are a lot of writers that need that help. 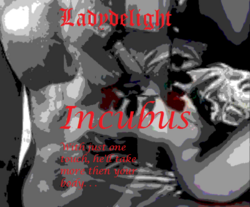 The work has two stories:

Incubus House Of Pleasure
Bee will do anything to make her two demons’ love her and an old woman with apples seems to have all the answers . . . or does she?

Punish Me with Ecstasy
Payback has never been a greater ecstasy. Angara has been kidnapped by a demon who will not let her go until she remembers the wrong she has done him.

The best thing to call these two stories are Hot Flashes, that is quick stories with some sexual heat in them, not a lot of plot, and little in the way of character development. Generally, most short erotica falls into this definition to an extent, and I have written my fair share of stories in this vein.

The first story I found I didn’t care a lot about in the beginning, the character Bee just didn’t connect with me, the old woman even less so, and the two Incubi of the story were more violent than I like in a story. All of that is, of course, personal preference. But what made it worse for me was that there were a lot of spelling, tense, and word errors in the story that just made it almost unreadable for me.

By the time the resolution of the story came, I just had to shake my head in disbelief to be honest. I don’t care for stories in which there is violence for the sake of it, and I didn’t like the turns the story took either.

The second story, I liked more for the theme of it, but more the two characters that made up the story. They were well rounded characters with a history and each of them had a goal to get to in the story as well. I could accept the situation Angara was in, I understood what the demon wanted from her and how he was going to get that from her by whatever means he needed to.

The problem was, like the first story, that the story wasn’t edited to the point of removing some glaring errors in words, tense, and flow that it really needed to. For example. “Owe” instead of “Oh” and “mad” for “made” which just happened too many times in the story and I just couldn’t get past that to enjoy the story as much as I would have liked to.

I’m giving this work two pitchforks out of five overall. The first story I’ll give a one, mostly of how the story was resolved, I just didn’t like it at all. The second I will give a three, mainly for the characters in the story, if not for the story itself.

The author needs an editor. Yes, this work was free at Smashwords, but with some editing, some structure work, and definitely a lot of tense correcting, the stories would read better and be better.

It wouldn’t take much I think to do that.