A Review of Lilith – Twin Soul Novels by Victoria Limbert

A Review of The Governess by Lady T.L. Jennings

I haven’t found much in the way of historical stories with Succubi in them that I really like. The reasons for that are many and varied, but I think the biggest one is that I can’t quite wrap my thoughts around the language of the past without stopping and thinking about every sentence. As such a story set in the Victoria age has problems from the beginning for me… 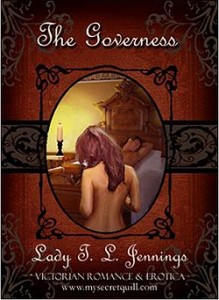 The Governess by Lady T.L. Jennings

The book is summarized as being about:

During the winter holidays Ethan is returning home to his family’s estate in the remote part of England, close to the Scottish border. After a family argument he goes to sleep half-drunk, however, in the middle of the night he receives an unexpected nightly visitor in his private bedchamber.

First and foremost, I can’t say with certainty that there is a succubus in this story. There are hints of that being true, but there isn’t a point at which I can point at words on the page and say, yes, they did write the word succubus here, so she must be one then.

But, again, it isn’t spelled out exactly and perhaps that is the point of the work. You have to make up your own mind what she is and what she is doing from descriptions that aren’t exactly clear for the first part, and being that the thoughts and words in the story are set in Victorian times, you can get sidetracked into the meaning of the words and not the actions of the characters.

I can also say that we don’t see horns or a tail on the character and so that blurs things further, though the eeriness of her appearance at night and what she claims make it almost a certainty that she is one.

I’ve read the rest of the stories in Lust and Lace, and she never appears again in the book. Each stories is in it’s own world in that way, which brings some interesting ideas together overall. But if you are looking for the modern actions of a succubus, removing of souls or other similar things, it doesn’t happen in this work.

The writer knows the Victorian age well, of that there is no doubt. The words and actions are right, the settings are right, it all makes sense from a historical perspective. But, and this is what as I have said I have issues with, the language of the past read in the present seems odd and it occasionally trips the reader up I think.

I’m giving this work three pitchforks out of five.

It would have made this more interesting a read I think…