A Review of A Succubus for Valentine’s Day and Other Tales of Perilous Pleasures by M. E. Hydra

A Review of Thirst by Rob D. Young

A Review of The Succubus Gift by B. R. Kingsolver

It’s rare for me to give a five to a book or a series that I like. Mostly for two really important reasons to me. One, if the Succubus, or Succubi, haven’t a personality, a life, a soul, then I just can’t feel like the story had meaning to it. The other is that there has to be a hook. Something in the story, the setting, or the characters that holds my attention and keeps me in the story.

I am thrilled to find a book like that, and in it, the beginnings of a series that I think holds a great deal of promise in it. 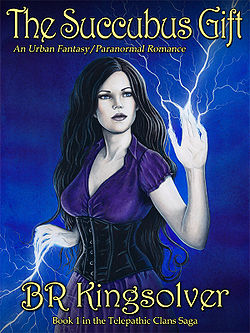 The Succubus Gift by B. R. Kingsolver

The work tells the tale of:

Brenna’s life is never the same after she discovers her unusual and mysterious heritage. In addition to being a telepath and having many paranormal abilities, Brenna learns she has the Succubus Gift. She has always been a good girl and isn’t comfortable seducing men, except one she really loves.

That’s just the beginning of her problems. Someone is stalking her. Will she be able to protect her newly acquired family and friends?

Then there’s the tall, dangerous woman who shadows her and hints a Goddess has linked them. And what is she going to do with a handsome, charismatic, womanizing man she knows she should avoid?

Some days a girl just wants to pull the covers over her head and stay in bed — with a willing young man of course.

Brenna is a beautiful woman with a lot of issues and torments in her life. Her parents died in a plane crash years ago, leaving her alone and having to suffer through a life of foster parents. The bigger problem is that she knows, has known since she was a child, that she has special gifts. She can do things that “normal” people cannot do. But more concerning is that her self image has been wrecked by a spate of past relationships which have made her believe that she isn’t beautiful. Her life since she lost her parents, has been focused on making herself better, and making something of her life.

But don’t talk to her about her sex life. She hasn’t got one, or at least one that doesn’t involve her lovers falling asleep moments after having sex, which isn’t good for a girl’s self-esteem.

One night she finds someone like her and helps them to escape from people trying to harm them. In doing so, she enters a world of telepaths, a world of mythical powers and abilities, a world in which things are not quite as perfect as they are meant to be.

There is so much to like about this book, and truly the couple of nits I have about it are really minor and hardly worth mentioning. So I’ll get those out of the way first. There is a moment in the story where Brenna is attacked and things are quite confused. A shot is fired, but it is unclear, at least to me, who was getting shot at that moment as it refers to a man and in the next sentence a woman feels the impact. I had to reread that part of the work three times to figure out that it was two different events happening at almost the same instant connected by one attacker’s actions. The only other thing that I noticed was that on several conversations, the closing quotes of a character speaking were not there. That’s a minor problem and it does not reflect on the writer’s ability to build this world, create the characters, and draw you into the story and keep you there.

I normally will read a hundred page book in about an hour, more or less. I needed three hours to complete this work, and in all honesty I wanted to read more when it was over. The thing about this story id that there is a lot of background to cover, a world to build, and to give purpose and solidness to the characters here. There isn’t a single character in the story, major, minor or just passing through never to be seen again, that hasn’t got personality to them. The explanation of what are called “The Gifts” in this story takes some time to understand and keep straight in your mind as you read. Thankfully the author gives a summary of the powers and abilities at the end of the work, and that becomes very useful at times.

From the title of the work, being a Succubus, or having the powers of a Succubus, is one of the Gifts, and a rare one at that. Still, over the course of the story, we meet, or hear of, at least ten of them. Considering that the telepathic clans, as they are known, have several thousand members in them, it’s not unreasonable to have that many appear. Adding to that the need for the new Succubus in town, Brenna, to meet them and learn from them, that kind of has to happen. I’ll get back to some of them in a bit here.

One thing that I noticed in the story is that a lot of the powers and abilities are tied into emotions, both good and bad ones, and how they alter people’s “souls.” The concept of souls in this work, what they look like and how they are perceived fascinates me and I have questions about them. The main one being, can a soul be truly seen? Questions abound in this work about that…

Brenna meets her extended family, which are heart warming and heart breaking scenes. Callie has to be my favourite of all of them by far. She reminds me a lot of my own mother in her manners and how she spoke to me at times. Those that know me will understand that I don’t say that lightly, and for me to express that means that she is, really and truly, special. Her grandfather Seamus is an amazing man. At first I wasn’t quite sure that I liked him, but at a critical point in the story… he becomes more. That really put him, and his family, into a better light that I expected them to be.

The one character that is, truly, a core point of the work is Rebecca. She is just about perfect in everyway that I can think of. She’s smart, she cares about Brenna, and their relationship is something beyond special. When the two of them were together, the story just lit up and it was even more of a joy to read.

There is a love interest of course, and his name is Collin. The thing about him that I liked was that he changed from really a person that I didn’t like at all in the beginning, to… well, I’ll put it this way, if the series doesn’t wind up with the two of them getting married I will be disappointed to no end… But I expect not. The change in his personality is well done, he is more than he seems at first, and that really makes him so much better.

There are several Succubi as I have mentioned. Cindy and Siobhan bring a view of Succubi that makes sense for them in this universe. It’s not harsh or unrealistic and I liked that quite a lot. They are, for lack of a better term, well seasoned Succubi and through them we get a glimpse of what Brenna could be, or might have been like. Irina is the innocent “new-born” Succubus that enters a world that she doesn’t understand, but needs to much like Brenna. I can see them as being sisters in a way. Samantha… Well, I’ll get back to her a little later, but she intrigues me and I don’t feel like we have learned, or spent, enough time with her.

Now as this work is the opening of a new series, what would I like to see in a future story in it?

Samantha. I will not spoil who she is, but, honestly there has to be a way for her to return, I have some thoughts about that, but expressing them here would spoil a lot of the story, so I won’t. Still, she’s a fascinating character in her own right and we really don’t seen enough of her. Bring her hack somehow and let’s see where she goes?

The author left several plot lines unresolved in the story, which I expected since this is only book one. But unlike some that I have read, they are a few, very specific ones. The question about Rebecca and Brenna and their future is something I want to see explored and the dangling question that connects to that I think can be a complete focus of one story alone.

It’s not a spoiler to say that we find out that Brenna is strong. Perhaps a bit too overpowered, but in this universe she has to be honestly in order for the plot to continue to its conclusion. Her darker side is something that I expect will be explored in the future, but I trust that the author will not go about this in the stereotypical “evil version of Brenna appears.”

Oh, one last odd thought. Why is it that most of the Succubi have a name that ends with an ‘a’? Oddly enough this is something that happens a lot with modern Succubi stories and I have to ponder that sometime…

And yes, I get the bemusement over my own name. Speaking of which, if ever a Succubi in a story reminded me of myself, Brenna fills that role quite well.

After all, isn’t the most important thing to care about others regardless of what happens to yourself?

Well written, a story that kept me turning the pages and wanting to know more. Characters that were real with their faults, mistakes, and feet of clay. Powerful yes, but having power and using it does not mean that you have all the answers… In this story, finding the answers drives the tale and makes it better for that.

A full five out of five pitchforks.

I can’t give a higher rating save to add that you really should buy this book and follow this series.

I would like to give the author special thanks for providing the first three chapters of their story for free on their site, the link is at the top of this review. As well, I thank them for sending me a copy of this book…

For that kindness, I will be ever grateful.

I would never have missed this for the world…

The next book in the series, Succubus Unleashed, is currently projected to be released in mid-2012.