Succubi Image of the Week 227

A Review of A Succubus for Christmas and Other Tales of Devilish Delights by M. E. Hydra

One of the authors that I have followed for some time is named M.E. Hydra, or as I have known them from the Literotica days, Many Eyed Hydra. I’ve always been taken by their writing style and their ability to tell a good hot story… especially when Succubi are involved. They have several books which contain most of their stories available for some time now. Three of them are anthologies of short stories and the fourth is a full length work. Over the next little while I will be reviewing each of them on the tale, starting this week with A Succubus for Christmas and Other Tales of Devilish Delights. 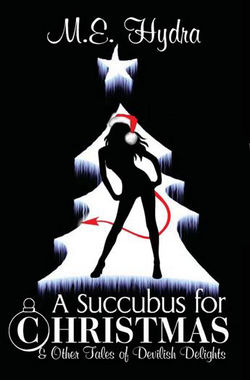 A Succubus for Christmas and Other Tales of Devilish Delights by M. E. Hydra

This collection of stories is about:

Beautiful, seductive, enthralling, sensual, irresistible…deadly. The succubus is an enduring icon of myth, a demon that seduces and sleeps with her prey before taking their life and soul. In this collection M. E. Hydra brings you thirteen erotically charged tales of sexy succubi and other exotic creatures. In A Succubus for Christmas a man discovers his surprise sexy gift also possesses a dark side… The Masterton Covenant asks how much would you risk for one night of perfect pleasure… Four men are taken to a very special place in Flesh Pitchers of Prague… A tough demon slayer discovers why ‘Men can’t fight them’ in Slayer vs. Succubus… A man gets his Happy Ending in a sensual massage that touches him right to his soul… A former soldier tries to resist the wiles of an exotic alien queen in The Coils of Aenictia. Prepared to be enthralled, aroused and terrified by these and other tales of dark, seductive beauties. They’ll give you pleasures beyond your wildest dreams, and terrors beyond your darkest nightmares…

This work is a series of short stories by the author M.E. Hydra, and as such I will review them all in short form before I review the work in its entirety: