A Review of Disturbia by Niall Teasdale

A Review of Demonsleep: Succubus Ascending by Binger Ray

I know that Succubi, for the most part, are seen as evil beings in literature and of course myth. Personally I don’t care of that aspect of them, and I would rather see the seductiveness and sexuality of them above all else. However, that’s not always the focus of a story with them, the question is whether or not focusing on the horrors of the myth makes for a good story or not… 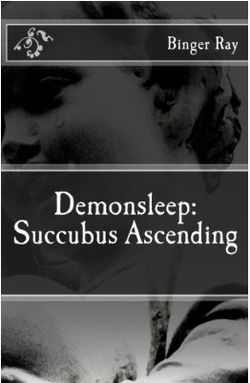 When Darrien Salter came into the Langdon family’s life, she already knew their darkest secrets. Little did they know, a tattooed stranger had been living in the attic of their home, hiding in the dark recesses of their rooms, and following them into stores, banks, and restaurants for months. He had good reason. As long as he continued to report their activities to Darrien, he could keep his wife alive… All the while knowing that Darrien was a Cambion, A being half human, half demon, on her ascension path to being deemed immortal and crowned a Succubus: a demoness appointed to steal the souls of men. With her invading their life supernaturally, can this family win against the odds?

Up front, the first thing I should say is that the story is rather violent in nature. All of the characters have dark sides, they all come out, and the dark side of humanity is there for all to see. While most of that is caused by the two succubi/cambion characters in the work, a lot of manipulation, lies, and similar actions all draw the main characters to perform acts that are, really, very dark, occasionally very evil, and that makes it hard to really want to care about any of them.

But here’s the thing, you do find yourself caring about a few of them, which makes getting through the darker parts much easier to do. That’s not to say that the story is happy all of the time, it isn’t, but then real life isn’t always a happy time either. And in this story, the succubi that appear in it make quite sure that the ones they claim are happy at first, but then things go downhill rapidly for them.

The work has some erotic moments in it, certainly the scenes with the succubi taking from their victims have their moment of pleasure, but it is not the core of the story. The central theme is the violence that they create by interfering with other people’s lives. There is drug use, manipulation of events and people, some really awful moments when characters are brought to their end as well. But then this work isn’t about the seductive nature of the succubi. It is a story of just how evil they really can be and are generally seen to be in most works.

So if you are looking for a story with traditionally evil beings, then yes, this story fills that role quite well. The thing of it is, and this I found to be well done, is that the two succubi in this story start out the same in their goals, but by the end one of them is forced to make a change and that leads into something different and interesting for me personally.

The only problem is, at the point I really wanted to see where they were both going to wind up, and I will not spoil that for you, the story comes to an end. Now this does leave a huge question to be answered if the author continues the story and I do think they should because while this book is about evil in all its forms, the next part of this story does not have to go there. It can move towards a resolution between the two succubi and, perhaps, something more than that.

Getting to the succubi that appear through the work, Darrien and Kym, I have to admit that I didn’t like either of them at the beginning of the story. They both seemed to be a bit too manipulative, too self involved and, mostly, were evil for the sake of being evil. While that was their theme through most of the story, Kym turned into something more than that while Darrien, at least to me, didn’t really change from what she was at the beginning of the story, which is a bit disappointing.

The author writes well, there aren’t really any moments that drew me out of the work spelling or otherwise, though I will admit that some of the more horrific scenes were a bit much for me personally. Now that is part of the setting and what the characters are, so you should expect some really violent moments in the work, but I could have done without them for the rest of the story I think held together well without them.

If you are looking for a story that tells of the dark side of humanity and how it can be played upon by beings like traditional, in a way, succubi, this is the story for you.