The second of two Succubus Halloween posters I love…

A Review of Devil’s Canyon by Steven Durette

A Review of Some Bad Decisions by C.D. Reimer

I don’t care for horror stories really. My problem is that I tend to have problems with Succubi being all about the horror, the blood and, of course, the deaths that they are involved with. To me if a Succubus is part of a story, they should be sexy, intelligent and most of all, I have to find myself caring about them… Otherwise I just have a hard time managing to make it through to the end. They have to have something resembling a personality… otherwise they are cardboard and I don’t like cardboard.

I prefer cherry pie, but that’s another story… 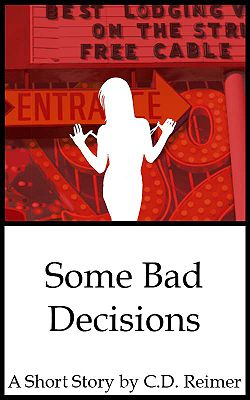 Some Bad Decisions by C.D. Reimer

Claude brings Plain Jane, a petite albino prostitute, back to his motel room for some late night entertainment. Unnerved by her craving for alcohol, unexplainable incidents and her knowledge of the Las Vegas ripper, he has a deadly surprise waiting for her. Once they start rolling in bed, he discovers that she is no ordinary prostitute and finds himself in a world of hurt.

It should be noted that this story was originally published as part of an anthology of stories but the author added to the work and then republished it as a stand alone piece.

The first thing to say is that this isn’t erotica. It is a horror story, the characters are written in that vein and, honestly, for me it was difficult to like either of them. Claude is a self absorbed man with a secret and it’s one that is obvious from almost the first page of the story. I found myself not caring about him, not needing to read his thoughts, and just waiting for his end to appear. In other words, he is totally forgettable as a character and that really is the point considering what happens in the end to him. Now that’s not saying that what happens isn’t poetic justice, because it is, it’s just that for all of his posturing he seemed like the stereotypical “bad man in need of a lesson.”

His language is gruff, sharp, and tends to be of a violent nature. Now characters must have a personalty, and he does, and a voice, which he does as well, there is no way  you can mistake it when he speaks, but it seems to be lacking something. I think that the simplest explanation is that he has no “soul”, nothing that makes it possible for me to either like him, or want to pay attention to him. But that is the point I think as when the climax and reveal in the story happens you can’t help but think he’s getting exactly what he deserves… No matter how violent that may be.

Plain Jane is arrogant, foul mouthed, bad mannered and all of the things that grate me when I look at a character. The thing of it is, I don’t believe that is her actual personality. I think it was a front to draw Claude in and trap him, which of course it does. Still in spite of that thought, in this story, Jane, as a Succubus, is simply a being of horror and nothing more. We get all sorts of descriptions of what she does to Claude, of which I really can’t fault Jane for doing what she did, but otherwise the actual “Succubiness” just wasn’t there for all of the attitude that Jane displayed.

The seduction isn’t there. It just really isn’t. I will admit that the idea of a Succubus not being able to hold her liquor I found hilarious and the effects of that were a bit over the top and made me smile. When I think about a Succubus, I see something more than a being with horns and a tail. Jane doesn’t quite get past that part of her and into who she is except tangentially.

More telling to me personally is that I just found it hard to care to know or see anything more about Jane when the story was finished with. She just wasn’t a Succubus that I could like in any shape, way or form. It’s rare for me to say that, but in this case it’s true. She was a means to an end, a direction in the story, a way to tie up loose ends in more than one way.

I find myself wondering what Jane was really like… this image of her was formed, as I said, to ensnare Claude and I have to wonder if she isn’t more than just a being of terror as she was here. There is a hint of connections with the Vegas underworld in the story and I find myself wondering about that aspect of her, and where it would take her story in the future should the author continue the story from here.

The writing was good, no spelling errors or writing errors that I could see, I would expect that from this author, I have read previous works of theirs and I expected that. What I didn’t expect was taking away the seductive nature of a Succubus and leaving behind something different. I really think that there is more to tell about Jane and I would like to see that. I think this author has a good hook with this story and it can go further from here.

Too much horror for me, not nearly enough Succubus seduction. Lots to ponder about the Succubus here, and that story would be something I would want to read.

I’ll hope for something more to come about her…

As an aside, this author will have another one of their stories appearing soon in the anthology work Roboterotica during April 2012, and you can find out more about this work here on the author’s site.