A speed painting of the Vindictus Succubus…

A Review of The Fifth Collection by Sullivan Hart

This week will be the last of three reviews of a series of short Succubus tales that I found. Overall I have to say that I liked all of them, but there is one small question I have about them that I’ll get into a bit later on…

This work is part of a series called the Succubus Short series, I reviewed one of them two weeks ago on the Tale here and last week here. Again, I liked all three of them, but the one thing that I didn’t like is how short they were and, really, they could have been so much longer I think as the characters in the works are really interesting and I find myself wanting to know more about them… 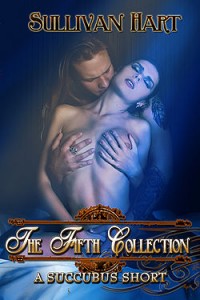 The Fifth Collection - A Succubus Short by Sullivan Hart

The story tells the tale of:

Bob, the victim, has endured four nights of helpless passion at the mercy of his winged and fiercely sexy visitor. Now she’s arrived for a fifth night, and this time he’s awake. Will he be a match for Jazz and her evil seduction or will he fade away into the night with a satisfied smile on his cold, dead face?

Jazz, as a Succubus is interesting, and the sex scenes are well done, but the internal monologue at times bothers me a shade. The other thing that bothers me a bit is the change of perspective between Jazz and Bo is titled before the story continues. I don’t think that was really needed as it was clear who was “talking” when the next part of the story began. It may just be the way this author writes, but I felt it was a little unnecessary here.

Otherwise, as I have said, Jazz is interesting and yes, she is very much a Succubus in what she does. But I have the feeling that she’s unsure of herself for all of the internal thoughts she has and the questions she asks of herself.

Bob as a character I felt was a bit on the bland side for most of the story, and his reactions to Jazz were immediately off to me. Still, in the context of the overall story, when you get to the ending, it makes complete sense. There is something missing in Bob’s character that nags at me, but I can’t quite put my finger on it…

Well written, no glaring errors in the work, and I was interested in it from start to end, but, just so short and really in this universe there is so much unsaid that could have been touched upon.

The problem remains that the story is too short and too many questions are left answered in the story. Just bothers me that with all of the possible places to go that we didn’t get there.

Now, as the series as a whole, I think that I was expecting different takes on Succubi and not what are, really, three different Succubi existing in a single universe. Whether that was planned or not I have no idea, but after a while I found myself expecting the ending that came in each of them.

That works if you read one of them, but all of them? It’s ever so slightly disappointing. Now that’s not as I said in the stories themselves. They are all well written and I liked them a lot, but where I have the disappointment is that we get hints of things that never really were explained in the series. Perhaps the one thing that makes me really wonder is the idea of a “secret shopper.”

I would love to know more about that from other perspectives…

As a series, I will give them all three pitchforks out of five. There are great ideas to build on, but they never really were for the sex that made the meat of the stories…