A Review of To Taste A Warrior by L.C. Dean

Souls are interesting concepts to be used in stories. What’s more interesting is where they are used to connect two characters together in a way that you wouldn’t have expected. And since souls and the thing that Succubi are interested in, wouldn’t it make sense that a Succubus would be able to “see” into one?

I would think so… 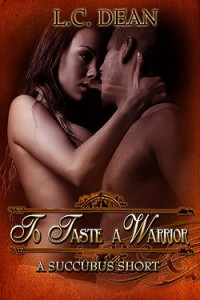 To Taste A Warrior by L.C. (Leaon) Dean

Fortunately, she’ll to do anything and be anyone, in order to satisfy her desire to taste a warrior.

I think the author wrote an amazing story here. The characters I love, the scenes are well done, but most of all at the end of it I wanted to know more and that I think is the mark of a author that can tell a story well.

Kassarina is, simply a lovely example of a Succubus. She’s sexy, demanding and most of all knows all the ways to make men do what she wants. And in this story Ries is the one she wants to do it with. While the means to get them together was a little bit forced, mostly in the quick move from meeting to sex that happens, it’s not that critical to the overall theme of the story in the background of finding that which was lost. I also like it that she doesn’t want to harm who she is with. That is something that isn’t seen a lot of when Succubi are involved in stories and it’s a pleasant change. And that’s an interesting story to tell when a Succubus is involved.

Ries is interesting, but knowing one particular member of my online family, my hero, I’m not sure that some of the things he did and said would be that of a Marine Captain. There’s the question of honour and I think, personally, that honour means more than most would understand.

It’s too short a story for the questions it raises and, more so, it bothers me that there is a longer story to tell that we don’t get to see here. Now I understand that this is meant to be a short story, but when you create characters that have so much life in them it’s a shame not to use them to the fullest extent possible.

I’dd love to see another story in this world about Kassarina and Ries. The tease is so strong and honestly there is so much more to tell here. I’m not going to spoil what that is, but, wow… Really want to know more about it all and how it happened…

Hot scenes, lovely interesting characters, but sooo much tease in it and I hope that the author continues this story somehow…