I still think that she is a lousy Succubus…

A Review of The Naughty Succubus by Cherie Denis

I think it’s interesting the different takes that people have on the myth of the Succubi and the Incubi. Some take it in the horror realm, some make it less so, but still very evil in nature. But sometimes a slant on what they are is found that makes them sexy, seductive beings that bring some joy into the world… and I really like those stories a lot. 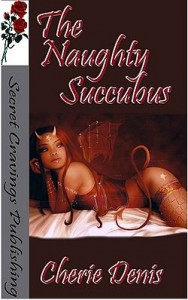 The Naughty Succubus by Cherie Denis

The tale is about:

Carlotta Collins is bored with her mundane life. She’s tired of being a good girl and following the rules. It’s time for a change. At the laundromat she spots a red card, reaches for it, loses her balance and lands in the arms of the man of her dreams.

Cory Alton doesn’t usually go for short, well rounded redheads, but Lolly’s different. She’s cute and likeable. Cory stays for a few minutes before he gives her the card and leaves.

The card is an open invitation to a party and something tells Lolly she must attend. She is surprised to find out it’s a meeting to recruit people interested in becoming succubi or incubi.

After weeks of training, she is free to find her prey. It isn’t long before she has Cory and one of his friends to keep her satisfied with all the semen she can handle.

Carlotta, or as she prefers, Lolly, has a rather poor view of herself really… She thinks that she ugly, that no one really wants to be with her and that’s a problem. The bigger problem is that Cory is handsome, sexy and give her all sorts of fantasies that she knows will never some true.

But she finds a red card at her laundromat which tells of a party where things could be different. She goes there and discovers that Succubi and Incubi are real… and they offer her the chance to become a Succubus.

What I find interesting is that the Succubi do not have horns or a tail, but they do have, for lack of a better description, golden gossamer wings. Incubi have a long tail, which isn’t described exactly, and eagle-like wings. Otherwise they have a bit of mind control in them, no shapeshifting to speak of really, but they can and do draw out the sexual desires in those around them.

I like the change of the traditional demonic wings into angel like ones, that fits my particular view of Succubi and Incubi, but having the horns and tail missing was a bit of a disappointment.

The story follows her transformation from a wall flower into a being of love, lust and sexuality which is an interesting journey to follow. There are some very hot scenes to behold and the lessons she learns are many.

But, it’s a bit vague and one of the rules, that telling someone that you are a Succubus means that you will die, seems a bit… too restrictive? Unkind?

The other thing that bothered me about the story was that the people that didn’t accept the offer were cast away from the story with a single line that seemed to indicate that they would forget through potions and not through any powers of the Succubi and Incubi that were at the meeting.

Seemed like a poor way to do it when having them use their powers would have been more interesting to see.

I liked Lolly, her character had life in her and there was a great deal of development in her by the time the story was done. But it went too quickly from “learning” to “doing” for my liking. It would have been very illustrative to see her making mistakes or something so that she wasn’t “perfect” as her teacher kept telling her…

Not that there is anything wrong with having an Incubus wanting you, but the resolution of that relationship was much too… if not sad, then disappointing even if the reasons for it are made clear in the work. I came to wonder how it was that the collection of Succubi and Incubi managed to meet for the rules that seemed to control them.

I think that about another ten pages would have been nice to tie up some loose ends, make the transformation of Lolly more vivid and allow for the relationships in the story to become more than they did.

I’ll give it four pitchforks out of five.

So, so very close, but just missing a few little things…