A Review of Tesla’s Succubus by Maxwell Avoi

Generally, succubi and incubi are supernatural beings. That is of course pretty much the standard concept of them. I found an interesting book that turns that idea on its head a bit and connects them to other worlds. It has a theme in it that some might not enjoy, but I think that the concept is well done and in the end that is what matters isn’t it? 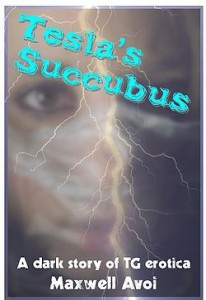 The military didn’t know what it was doing during the first Philadelphia Experiment; why would it try the same thing again? The results were impressive, but for the passengers on a bus passing the base at the time nothing would ever be the same again.

Now that is very, very misleading so far as the actual story. I think a better description would be: Caught in the aftermath of a repeat of the Philadelphia Experiment, a man’s life is changed forever by forces that he cannot understand. Changed in body and given the powers of a Succubus, she fights with the thing that has changed her and to keep her sanity in a world gone mad.

A few things that should be noted about this story. Yes there is a central moment, two of them in fact, where there are transgender themes and transformations involved. But the transformations are quick and not that graphic. In fact there are quite a number of moments in the story where there are more horrific things that happen to people as a result of the experiment and, as such, they tend to be more graphic in the story.

The sex scenes, such as they are, are not very graphic either for what happens in them. There is more internal dialogue between the main character and the being that is with her, than there is really with anyone else in the story.

That’s not necessarily a bad thing as it gives us an idea of what she is going through, an idea of what the creature wants and why she was transformed into what she becomes. Now she does become a Succubus in a way, but she is not the classical definition of one.

She has no horns or tail, but does have a semblance of mind control to use on others. She also has the ability to transform herself into the “dream girl” of whomever she is attempting to feed on. So in that aspect, yes, she is a Succubus.

But she’s not a supernatural one. In this case she’s the end effect of a being that has been trapped in her through the experiment. Which makes what happens, how she reacts, and what it does to her a very interesting read. The TG aspects are very quickly glossed over and as a result if you don’t pay attention to them, you could easily overlook them.

I caught a few small spelling mistakes in the middle of the book, but they were a minor annoyance in the overall read. The author tells a good story and has created some very good characters, but I think they went a bit over the top with the descriptions of what happens to people effected by the experiment. It’s not necessary to describe burning bodies and other horrors several times in one scene when the point is made very clearly early in the climax of the book.

I was, I have to admit, a little disappointed in the ending. It suddenly came to an abrupt end, something that I don’t really like, and the resolution of the main character’s situation was unsatisfying in that it’s unclear if she is or isn’t a succubus, or what she was transformed into, when the story ends.

I can see where this could be continued in another story, or have what happened to the main character happen to someone else. There is a lot of loose ends that make you wonder what happened to a number of minor characters and one in particular’s end is disappointing as we are not sure what happens to her.

I’ll give it three and three-quarter pitchforks out of five.