Succubi Image of the Week 215

A Review of Tales from High Towers’ Study by Niall Teasdale

I was quite happy to see that one of my favourite authors released a small collection of short stories from the series he has been writing. The series is by the author Niall Teasdale and tells the story of Ceridwyn Brent and the universe she lives in… and there are, or is, a very important Succubus in the series named Lily Carpenter who I have come to love. My first review of his first book, Thaumatology 101, you can find here. And I reviewed the second book in the series, Demon’s Moon here on the Tale as well. And, of course, I reviewed the third book in the series, Legacy as well. This week I will be reviewing a collection of stories from this universe that, while short, do reveal many things about the characters that explain why they are and where they are… As an aside, if you click on the Smashwords link here, you can get a copy of this work for free. The Amazon link for Kindle users will cost 99 cents if you make that choice… 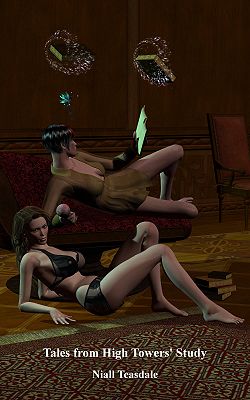 The book tells of five tales from this universe:

Bedtime Story: What kind of fairy tales what an incubus tell his half-human daughter at bedtime?

Birthdays: On the wildest, most magical night of the year, Ceridwyn Brent has her birthday.

Black Lily: Lily Carpenter goes hunting for a snack at the Dubh Linn pub and gets more than she bargained for.

Redemption: Carter Fleming celebrates his forty-ninth birthday by hiring a hooker who is about to change his life, and hers.

I have wanted to see these stories in their own collection for some time now, I have to admit that I have a small connection to it as well in that I sort of gave Niall the idea for the cover, so you can blame me for that if you’d like.

I also want to make it very clear that I have purchased every book that Niall has released as some might wonder if my views are a bit coloured on the series. Mind you, a series with a smart Succubus in it will always get my attention, but one with the world, characters and writing to match? That’s just icing on the cake…

If you haven’t read the series so far, this work is a good taste of some of the characters in the series, but also Niall’s talents in telling a story which personally I enjoy very much. I’m going to touch on each of the tales here a little bit and try not to spoil it too much…

Bedtime Story: One of the characters in the series that we actually know very little about is Lily’s father. He appears in the third book of the series, but we know get to know much about him and, honestly, if you read the book you would have a poor opinion of him. This story however, I have to say was loving, beautiful and gave us a peek at him being a father. He loves Lily, cares about her, and wants to see her grow up. Lily is only a child in this story and she is being read a bedtime story, but the cuteness of little Lily is so very much reflected in the Lily that I have come to love and for that I am grateful to have the chance to see her like this.

Birthdays: This was, for me at least, the saddest story in the collection. It tells of Ceri’s birthdays at several points in time. Two of them are happy in a way, but it is the third one that tells so much about her and how absolutely lost she was after her parents passed away. More interesting is that it also, I think, foreshadows something to come in the series and is well worth reading and remembering for the future.

Black Lily: It is sometimes hard to remember that Lily wasn’t the person that she became after she met Ceri. The story shows us a moment in that Lily’s life where she wasn’t happy, didn’t like herself and most of all, didn’t think she could be more. It’s important to see where Lily came from to appreciate what she has made of herself. This story shows a lot of that and it’s important to know.

Redemption: If Black Lily was the dark of Lily’s life, then this story was the first glimmer of hope. It tells of the first time that Lily met Carter Fleming, a character in the series that gave Lily a chance, put her in touch with Ceri, and, most of all, is a focal point in the series for much of the personal growth that both Lily and Ceri have gone through. This story is vital to understanding why Carter makes the decisions he does in the series, and it explains much of his character.

Nightshade: On it’s own a inspired piece of writing. It involves two, and I hate to call them this, minor characters in the series, John Radcliffe and Kate Middleshaw who are police detectives that deal with supernatural crimes. It gives a look into both of their lives away from Ceri and her problems or their having to deal with crime within the series itself. More interesting is that while it does tell of John’s home life with his wife, it also tells of his fears and frustrations as well. It also opens a small window on Kate’s life in a way that I didn’t expect from the story until the end when it was revealed. I have to wonder if both of these characters will come to have a more central place in future stories in the series… I hope so as they have much to say I think.

I’m giving this work, five pitchforks out of five.

It’s not enough to just toss out stories in a universe for the sake of doing so. The stories here matter in the overall scheme of things and whether you have read the series or not, it’s time well spent in a world that is cared about.

And that, really, is what matters most of all.

The next book in the series, Dragon’s Blood, has been released and I am reading it at the time of this entry in the Tale… I’ll have that review up sometime in the next week or two… Depending on that thing that’s called real life of course…