It might say Succubus on the title, but is it?

A review of Incubus by A.M. Wyckid

Generally speaking, when I see a book title and it’s description, I expect certain things from the book. Every so often that doesn’t happen. Now that’s not really an issue as what happens in the book can be more than I expect it to be… sometimes… 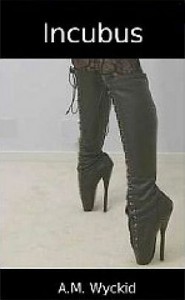 Your life sucks if you are fat girl, in a dead-end job, with an abusive boyfriend who takes your money, knocks you around landing you in the hospital, and then sticks you with the bill.

Things start looking up when you realize maybe you really aren’t that fat after all, your hair is not as stringy, and your face, that everyone said was beautiful, really is. Then you find out your poker skills are uncanny, and win enough to cover most of your debts. You also realize that you aren’t as straight as you thought you were, and your BFF, who is definitely gay, becomes something more than a friend.

So life is good, right?

These changes are happening because you are possessed by a demon. He’s called Shuun and he’s got you by the short hairs, metaphysically speaking. You are being pursued by criminals who think you know too much, your new girl’s in hiding — from you as well as them — and every day brings some new dose of strange that’s just hard to take.

You decide, that’s just about enough of that crap: when things turn tough, the possessed turn evil!

The story isn’t at all what I expected it to be. Oh there are moments in the story where I did wonder about where the author was going and why, but that’s something that happens from time to time.

Annika is the main focus of the story, a woman that has the worst of lives in the beginning of the story and then has to deal with her life changing dramatically when she gains what can be best described as succubus-like abilities. Now that’s not to say she becomes a succubus, but she has the ability to shift form among other powers.

Shuun is not what I would define as an incubus. What he is exactly I won’t spoil, but for those looking for a pure succubus or incubus story, this isn’t it. There are no characters with horns or a tail or for that matter anything connected to the myths to speak of.

I wish that the author would have taken another pass at the story for grammar and spelling to be honest. There are tense problems at various points in the work that were jarring to put it mildly. I also would have liked to have less of the “pain and suffering” that happens in the story and more exploration of what Shuun is, really, and what his purpose in transforming Annika was.

The book ends on something of a cliffhanger, which I will have to assume is designed to connect this work to another future one, but that seemed almost as an afterthought which was irritating to me personally.

Given that there isn’t much, if anything, succubus or incubus related in this work, I’m going to give this two pitchforks out of five.

The story is interesting, I give the author full points for that, but give it a good editing and that would help it more than anything else…