A Review of Haunt by Amber Delaine

Another Incubus themed story for review this week… It’s a really involved and to be honest tragic story of the darker side of the universe, but then not all stories are happy ones in truth are they? 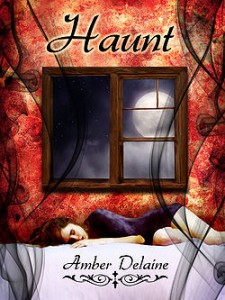 The story is described as being:

Artist Megan Nelson has never lived anywhere but the tiny Texas town in which she grew up. There is one bus, one corner store and everybody knows everybody. So when a stranger shows up, Megan is more than curious. Adam is more than he seems: beautiful and strange. Megan soon finds herself falling in love with him as she learns who he is and where he comes from. But being with Adam comes with a price. The closer Megan gets to Adam, the more she realizes he holds a dark secret which threatens to tear apart everything she has ever known. On top of it, Megan is plagued with guilt over her best friend, Tony. As her new love life puts a strain on their old friendship, Megan learns how love can help her overcome her terrifying circumstances and change the rest of her life.

It has to be said up front that the story is, honestly, quite sad. It’s heartbreaking to see what happens to Megan and Tony as the story goes on. And what Adam, the incubus, does just makes the story so much worse to be honest.

That’s not to say that the writing isn’t good or that the story itself isn’t worth reading, it’s just that you need to go into it with the realization that it will be sad at times and that not everything ends in a good way for the characters in the story.

For Adam is, quite simply, an evil being with evil plans and in truth is so very much the classical incarnation of an incubus without a doubt. It’s quite easy not to like him, though that takes a bit of time from his first appearance in the story, but when that comes, you find it easy to wish a good deal of hurt upon him at some point in the story to appear.

But I won’t spoil what he does or what happens in the end. But I will say that I could understand the final resolution of the story being what it turned out to be for everyone and I admire the strength of Mrgan to do what she does in the end.

The author writes well, has excellent characters that feel real and you care about them quite a lot with the story unfolds. There are moments when they do something and you want to poke them with a finger to tell them that they are being stupid, and that happens a lot, but eventually there is meaning behind their actions and that’s refreshing in a story…

It was more violent a story than I like, there were moments that I did consider stopping reading the work, but the writing kept me involved to the end.