A Review of Devil Red by Nova Chalmers

Some stories have twists in them that almost make the journey though the story worth reading. Changing stories that we all know into something different yet familiar is really a talent that few authors have. The question that strikes me is whether the twist in the end is really needed in the story or is it just there for the sake of being there? 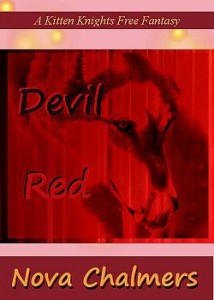 A new twist on an old story. Meet Devil Red, a not so innocent woman on a mission. She’s got a treat to deliver, but when the others don’t quite play by the rules, Red gets even.

If anyone can sort them out and get to the cottage on time, it’s Devil Red.

Imagine the story of Red Riding Hood taken to a world of innuendo, sexual trysts and more sexual tension than you would expect to see. That in summary is the world that this author has created in this work.

Now I have to say that from the beginning that the sex in the story was quite central to the story. All kinds of fetishes and acts appeared from the start when Red appears to the end where the twist is revealed to the reader.

I won’t spoil that twist, you can read the story for free, but I don’t see how it needed to be part of the story, nor really what it added to it in the end. It was, I think more for shock value than anything else which after all of the rest of the story and how well that was written was disappointing…

But it is free, so you can read it and make your own decisions about the story and if the twist was really worth being there…

Oh, there are Succubi in the story, but they are fleetingly there in the work…

I’ll give it two pitchforks out of five.

Too short, the twist for me was not needing to be there, and I think that it took what could have been a really cute sexy read and made it a lesser story…