Succubi Image of the Week 210

A Review of Legacy by Niall Teasdale

I’ve been taken by a book series over the last year by the author Niall Teasdale, and to my pleasure he has released two more books in the series for a total of three so far with another to come soon as well. My first review of his first book, Thaumatology 101, you can find here. And I reviewed the second book in the series, Demon’s Moon, last week, and that review you can find here on the Tale as well. This week I will be reviewing the third book in the series Legacy, which I personally loved for all of the things we learned about Lily, the half-succubus of the series…. 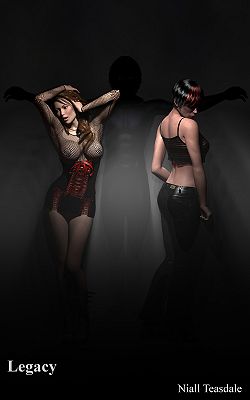 The book tells the story of:

All Ceridwyn Brent wants is a normal life, well, as normal as it gets when you are the only living sorceress in the world, your lover is a half-succubus, and you have a werewolf for a mate. Work is keeping her busy enough; she is trying to capitalise on her research with her boss by building a power generator which uses magic to generate electricity, and she has a PhD thesis interview to get through so she can finally be Doctor Brent.

Then mysterious, dark figures are seen watching the Battersea pack, paying particular attention to Ceri. The Greycoats, the supernatural branch of the Metropolitan Police, turn up to talk to Lily because men have been dying, apparently the result of a succubus feeding on them. To make matters worse, Lily is having dreams about the deaths and is starting to believe that she might be responsible. As Lily’s control over her demon side weakens, and it looks as though her father may have returned to Earth, Ceri must face off against the dark magicians pulling their strings from the shadow world under the bright face of London.

As an added extra, included in this book is an unpublished short story, Black Moonlight. Ceri, Lily, and Michael go to a rock concert where Michael’s half-brother is the base player.

It’s very hard not to spoil much of this book, so you’ll have to forgive the vagueness of some of my thoughts about it.

I was taken by the lengths to which Ceri would go to protect Lily. Not just in the sense of comforting her when that was needed, but also to take risks that might, possibly in the future, come to haunt them both. I did have moments in the story, especially in the first moments of it, when I wondered about Ceri’s mental state at times. It was explained well when it needed to be, but even with that, I felt like something else was going on between Ceri and Lily, and it has throughout all of the stories so far. The thing of it is, to puts a lot of tension between the two, builds on that a lot in this story, but when they have to come to a resolution on their relationship, out of need more than anything else, Ceri didn’t do the easy thing and that made me respect her as a character more.

I also found Ceri’s past coming back to haunt her in this story was well done and actually more than I expected. I felt that how Ceri dealt with the horrors inflicted on her in the second book seemed too pat. That is to say, that there didn’t seem to be any long lasting effects on her from her experience. That came to an abrupt change in this work. She suffers, and I can see the how and why of it, but when it comes, it’s not something that is brushed aside by her. It’s effects are real in that there is emotional and mental harm that Ceri suffered and she starts to be effected by that.

Lily’s past comes back to haunt her in this story, and it breaks her at one point. That was, honestly, the saddest thing to see happen. I understand why it had to, I know that in the end it serves to get Lily to a point she needs to be at, but, it wasn’t the easiest thing to read when it happened.

Lily’s father appears in this story, and I won’t say much about him save that I would have liked to know more about him, and Lily’s mom for that matter, than we do. Yes there are moments where Lily’s past through her parents is shown, but it’s fleeting and I had the oddest feeling that a lot was left out to be revealed in the next story. Lily’s father was, mostly, what I expected him to be. The story itself, and Lily herself, make him out to be quite the evil being… I expect to see him again… soon.

The threat that Ceri and Lily face is well wrapped in darkness and you don’t get a good sense of how bad it is, and who is involved until Carter, one of the main characters in all of Niall’s stories and an important person to Ceri and Lily, opens a door to them, and to the reader, on a part of the world that has been hinted at before, but never really revealed. That places another problem into Ceri’s universe she had to deal with, and considering that they threaten someone she loves, namely Lily, I was surprised at her response to them. I don’t think I would have been quite so… nice with them.

It’s good to see many of the characters in the previous stories appear again in this one. More so that their appearance means something to the story and it isn’t just a name-dropping exercise. One thing that I have learned about this series is that you should pay attention to all of the characters in it, no matter how small their roles. They will appear when you least expect them to and then their reason for being in the series makes you stop and wonder why you didn’t see that when they first appeared.

As in all of his previous works, the writing is solid, the characters are well rounded, and the plots within the work are well thought out. The science of the magic in this world remains solidly grounded in rules as well, which adds to the overall plot. There isn’t any point where a solution is offered or a threat appears, where it makes no sense with the rest of the universe that has been created before. The past is remembered by the characters and that I think is wonderful to see. It makes the story, and the series, more like “reality” and, of course, reality is what you make of it isn’t it?

At the end of the work, I was quite satisfied with the resolution of the plot, at least the main one, which resolved several ongoing themes in the series. I could see a few dangling plot lines that will lead, I am sure, into the next book in the series, which I am fine with as well. I still have a lot of questions about Succubi in general in this world, but then there are other beings, like Twill, the fairy of the series, which we know little about. But then a good series shouldn’t give you everything you want in one moment, but sprinkle knowledge and understanding throughout.

And this series certainly does that…

The second story in the book, Black Moonlight, actually had a moment in it that brought me to tears which I think is a good indication of how much I have become invested in the characters in the series. Set during the events of this book, it gives us a look into part of the werewolf Michael’s life, as fleeting as it is. That’s not a bad thing as what we do see answers a lot of questions about this character and, at least for me, makes me wonder about his and Ceri’s ongoing relationship in the third book.

Niall has written some other short stories that he has published elsewhere in the web and you can find them here. I can’t quite decide which of these I like the best, but I hope that, eventually, they appear as their own book because they add a lot to the entire series and I think that they haven’t been seen by a lot of his readers…

I’m giving this work, like the first two in the series, five pitchforks out of five.

Some answers given, some hints of what is to come appear. All wrapped in excellent writing, characters and stories that are the mark of a talented author that cares about their works…

And I have no doubt that the next book in the series, Dragon’s Blood will add so much more to this universe. I can’t wait to see what happens next…