Succubi Image of the Week 209

The 2011 Succubi Year in Review

A Review of Demon’s Moon by Niall Teasdale 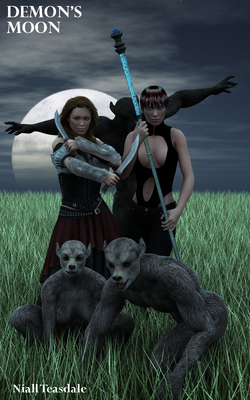 A PhD thesis on the metaphysical change process of were-creatures, what could possibly go wrong with that? Ceridwyn Brent, thaumatologist and sorceress, figured it was just a matter of getting a few friends together, putting them in the middle of a scanning thaumometer rig, collating the results, and writing it all up. No muss, no fuss. She even has one of the rare South American were-creatures to work with, and exciting new insight into the process to write up. Her doctorate is a shoe-in and her personal life with Lily, her half-succubus “pet” has never been better.

But something is going on among the werewolves. Dane, leader of the North Hills pack, believes that an old menace is returning to Britain. Alexandra, the enigmatic Alpha of the Battersea pack believes that Ceri is the only person who can stop that menace from doing something which will threaten mankind as well as the wolf packs. When werewolves across the country suddenly go to war with each other, Ceri and Lily have to go to war themselves to save their new friends, and Ceri must find “The Fair One” before the Winter Solstice. For then, beneath the Demon’s Moon, the fate of all werewolves will be decided.

There are two things that I like… One is curling up with a good book… The other is looking up from finishing it and realizing that I spent seven hours reading and didn’t stop once. This work gets both of those check-marked off… Another engrossing story from the Ceri universe that is lovely in every way.

The story itself builds in an interesting way in that we get hints about what might be happening through most of the story, but the actual revelation of what the threat is, how that threat is coming to pass, and what can be done about it, are kept away until the right moment to reveal them. I thought that seeing the way this universe works, especially in its government and how it guards its secrets, was fascinating.

The characters grow, the world is more and more detailed, and most of all, the underlying plot, which I will not spoil, made a lot of sense. I didn’t see the resolution of the plot at all, I had an idea, but it didn’t turn out the way I expected. But the climax was everything I could have asked for. You created a world within a world for the weres and what they have as their own society which was well explained and brought a lot of questions from the pervious story to their logical ends… bravo!

The book itself mostly focuses on werewolves in this universe and the author has constructed a society and structure for it that serves well for the characters to live in but also doesn’t feel like something that was added as an afterthought to the story. It has a core relevance to the book, it’s important, and you need to pay attention to it. I thought it was interesting that even within a society were, generally, all of the characters are weres of some kind, the social structure broke into small groups with their own opinions of other groups they were attached to, by biology at least if little else sometimes.

I can’t honestly call any of the characters in the work minor ones really… That is to say, there is no point at which you can look at one and think that having them there was a bad idea. What’s more interesting is that minor characters from the first book grow into major ones in this book and vice versa to an extent. In doing so the mythos of this universe is enriched and it makes reading the work, and the series, more gripping as you care about the individual characters more throughout the book.

Lily, my favourite half-Succubus was central in the story again, which I enjoyed… I loved the way that Lily grew in this story and how her relationship with Ceri is progressing. I think that I like this smarter and more… passionate Lily as she comes to realize, and I hope, to help Ceri realize what she can do. I also liked that we learned some of the fears that Lily has through the story, and also how much she loved Ceri and would, really I think, if it came down to it, die for her, which I hope never happens in the series.

Ceri, the heroine of the series, I also think grew up a lot in the course of the story, though there were two moments where I was a little squeamish at what happened to her. But she didn’t break and I think that in the end, you have to place your characters into jeopardy… and Ceri seems to be into a lot of that doesn’t she? Ceri is hurt, there is no doubt of it, but she pushes through that hurt in order to battle the evil that wants to turn the werewolves to its goals. That shows a great deal of character in herself, but, I think that it also shows that Ceri is vulnerable in other ways which I expect the author to explore in the future.

Solidly written overall, it kept my attention throughout, and I eagerly turned the pages wanting to see what would happen next. There are some sexual scenes in the book, but like the first book they aren’t the point of the work, but endeavour to solidify the relationships between various characters.

Lily showed some of her Succubus powers in the work, but she didn’t go so far over the top that I didn’t like it when she did so. What was interesting, and happens somewhat in each book so far, is that Lily treats her powers and her relationships with others in the book as just being the way things are. However, and this is the part that I like, you can sense how proud Lily is with Ceri after a battle with what she did… mind you it makes Lily just ever so slightly horny when Ceri displays her power. Then again our Lily is connected to someone that is very special in this universe and that is becoming more clear as each book comes to its end.

Lots of questions left at the end, but that’s just fine as, of course, book three has appeared with its own trials and tribulations for our heroines and friends… I saw a lot of foreshadowing of what the next book will be about, and if I am right, then Lily and Ceri are going to be in a lot more trouble personally next time… and honestly, if that trouble reveals more about Lily, then I’ll be okay with that…

I’m giving this work, like the first book, five pitchforks out of five.

The work expands on the first book well, the characters develop in ways that are a joy to see, and most of all, the story is a gripping one. I also liked that there are some openings in the plot for the story to continue smoothly into the next book, which will have Lily facing her own demons in a lot of ways…